I’ve always been interested in light – more than most contemporary painters.1 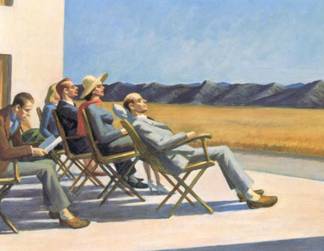 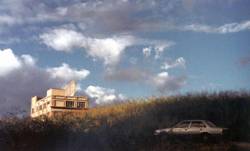 Hopper is one of the few American artists working outside surrealism who approaches its dreamlike quality.5

Edward Hopper appears at least ten times in the writings of Jean Baudrillard.6 Among artists he liked, few matched the esteem in which Baudrillard held Hopper. Hopper was also a painter who, while he did not have a direct influence on Baudrillard’s photography, shares with him, a love for recording sunlight breaking over the surface of objects. 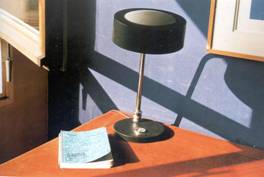 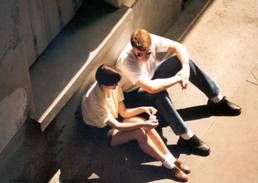 In Hopper’s case he was also drawn to the effect of artificial light and some of his most famous images are of night scenes. 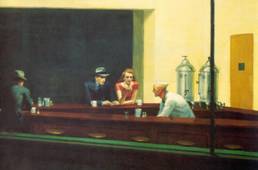 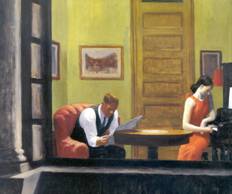 You will not find Baudrillard in Troyen et. al. but you will find his favourite recorder of sunlight and the masks people wear in public places (and sometimes at home). Not unlike the mask Hopper presents to photographer Arnold Newman.

Carol Troyen rightly suggests that Hopper was a painter of doubt and that even his most seemingly straightforward works are somehow “unsettling, ordinary yet somehow odd”.10 She compares his work to that of David Riesman’s book The Lonely Crowd (1950) which she says provided critics with a new vocabulary for describing Hopper’s work. She is correct in this analysis but it is one we must simultaneously be wary of for reasons I will soon discuss. While Troyen falls head first into the old trap of taking Hopper to be a realist she says he was one “dedicated to telling difficult truths” and that works like Sun in an empty room present us with intimate enigmas to contemplate.11

Eliot Bostwick Davis’s chapter “Hopper’s Foundation” examines two areas of Hopper’s work that are interesting to Baudrillard. The first involves sunlight. Davis acknowledges that for Hopper light was intuitive rather than conscious and refers to Hopper’s famous remark: “What I wanted to do was paint sunlight on the side of13 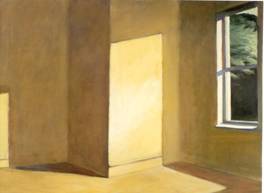 a house”.14 Baudrillard takes this remark as an indication of Hopper’s rejection of both sociology (the effort to understand him as a painter of lonliness or sadness) and efforts to categorize his work as falling under any particular “ism”.15

The second place where Davis and Baudrillard cross paths concerns a central aspect of Hopper – his painting of the mask that both he, and all of us, wear in public. Davis writes that William Merritt Chase (one of Hopper’s teachers) “exhorted his students to pay attention to the soul of the subject, noting, ‘Do not imagine that I would disregard the thing that lies beneath the mask’”.16 But this was precisely where Hopper and Chase disagreed as Hopper’s work proves many times over. Hopper, not unlike 20th century British painter Francis Bacon, did not believe we could pretend to penetrate the mask of our sitter – even if the painting is a self portrait. For this reason Bacon’s portraits always contain an element of abstraction which stands in for the unknowable mysteries of the sitter. Hopper addressed the same problem through the mask.  Davis takes Hopper’s 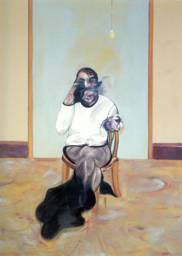 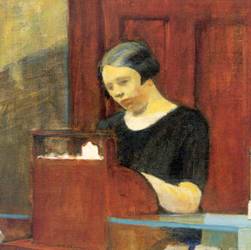 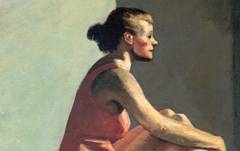 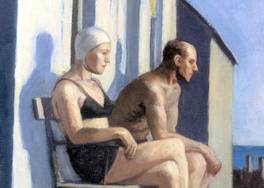 mask as evidence that he “never fully developed into an accomplished portraitist”.21 In reference to Hopper’s self portrait of 1913 Davis goes on to say that Hopper “rendered a mask that reveals little of his soul”. As in the case of the women in Tables for ladies and Morning sun or the couple in Sea watchers (and many other of his works) Hopper possessed that rare ability (including his self 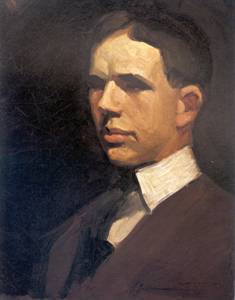 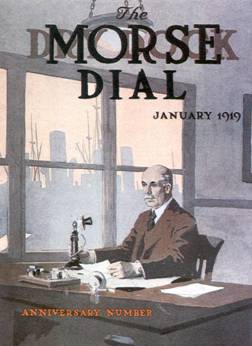 portraits and commercial works such as his cover for The Morse Dry Dock Dial), to paint sitters absent from their lives. This is not, as Davis suggests, a weakness in Hopper – but rather, as Baudrillard understands – a great strength.

Troyen also mentions Hopper’s masks in two of her essays. In “Hopper’s Women” Troyen says that Hopper’s dancer in Girlie Show “has become hard; her anatomy exaggerated, even fantastic, and her face a mask”. She also notes that even Hopper’s landscapes can be understood as presenting a mask in her essay “Hopper in Gloucester”. Here she quotes a New York Times critic (E. A. Jewell) who wrote: “But behind a mask almost photographic in its fidelity to visual fact, something more significant abides… In any one of these paintings and water-colors the onlooker is sure to be impressed with the load of material that has been left off the stage”. 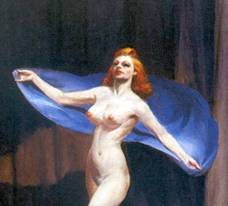 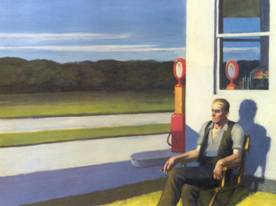 It is the presence of masks and an agreeable photographic quality in Hopper’s work that is also at the core of his appeal to Baudrillard. While this goes unmentioned in the essays in Troyen et. al., the many colour illustrations in the book allow us to see for ourselves why Baudrillard so liked Hopper. For Baudrillard, Hopper shares with Jackson Pollock a quality of anarchism in art. Neither Pollock nor Hopper pursue an analytic truth for Baudrillard – they each paint for the pure joy of it. I will add at this point that joy is precisely why Baudrillard wrote and why he also took photographs.26 The mask in Hopper’s work works, for Baudrillard, at the level of appearances behind which lies the real (identity of the person), we never can say we fully know. Hopper is for Baudrillard the kind of artist who approaches sociological interpretations of the world without descending into them. As Hopper told Kuh: “Though I studied with Robert Henri, I was never a member of the Ash-Can School. You see, it had a sociological trend which didn’t interest me”. He then proceeded to inform Kuh that his work contained no social content whatsoever.27

What appealed to Baudrillard about Hopper is that he does not paint caricatures (the primary by-product of much sociology), but characters wearing masks which do not attempt to bring out the truth of a person but, more importantly, the illusion of the person via recording of his/her secret otherness.28 This is why it is so problematic to see Hopper as a realist and why it is such a good thing that Troyen et. al. consistently force their readers to wonder about what lies beneath the surface of a Hopper.  At several junctures in the book I was struck by what a shame it is that such well trained art scholars such as Troyen et. al. are not aware of Baudrillard’s take on Hopper as it would have helped them probe deeper in so many key areas. Instead of depth then, what we gain from these essays are breadth.

There is also, as Troyen et. al. do understand, a photographic quality Hopper’s paintings. His ability to point us to, but not reveal, via the mask, a person’s  secret otherness, reminds me of the photographs by Luc Delahaye of Paris Metro riders taken without their knowledge. Delahaye, like Hopper, creates another scene from the real which has nothing to do with analytic truths – sociological or otherwise.29 This is an act Hopper manages to perform even in the only one of his sitters who makes direct eye contact with the viewer (Western Motel, 1957). 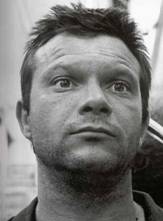 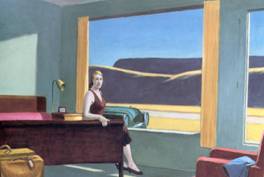 As a photographer Baudrillard says that Hopper was not an influence but he does acknowledge that there is something of Hopper in his photograph Saint Beuve (1990) [see image 4].32 Photographs such as Paris (1986) [image 3], Alentejo (1993) or Amsterdam (1989) tell us a good deal about Baudrillard’s similar love of natural sunlight on objects. 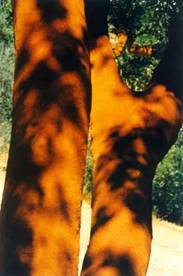 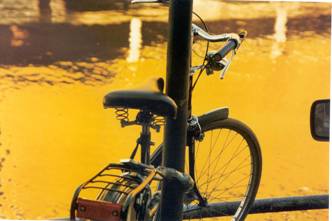 Overall this is a highly informative collection of essays on Hopper. Troyen’s “Hopper in Gloucester” notes that in was here in this small seaside Massachusetts town that Hopper began walking around looking at sunlight on the houses as she takes us through these years in his development.33 We also learn that Hopper went against the grain of the day in painting many older Victorian edifices which were distinctly out of favour in American aesthetic circles in the 1920’s.36 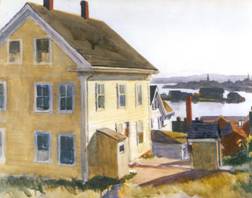 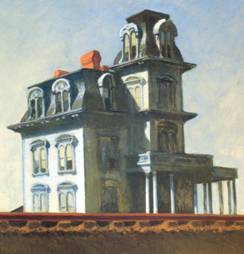 Hopper. House by the railroad

Janet Comey’s essay “Painting sunlight on the coast of Maine” points to the modernist geometrics which inhabit many of Hopper’s paintings which sets the tone for the tiresome discussion of realism versus modernism that takes up too many pages of this book . Carol Troyen’s essay “The Sacredness of Everyday Fact” (quoting Lewis Mumford) is also a good essay on how Hopper approaches narrative in his paintings but in a way that forces us to make up the story – a sound strategy, as it turned out, for avoiding social commentary while encouraging it.

Judith Barter contributes two outstanding essays which round out this volume. In “Nighthawks: Transcending Reality” she says that Hopper’s real subject was mood. I think this statement is true so long as we accompany it with a deeper analysis of his masks and his way of painting people as absent from their lives which this volume does not. Still, Barter does an excellent job of establishing historical linkages between Manet and Hopper, van Gogh and Hopper, and the surrealists and Hopper. Barter rightly points out (in her essay “Travels and Travails: Hopper’s Late Pictures”) that Hopper’s Dawn in Pennsylvania “recalls the oblique angles and eerie moodiness of Giorgio di Chirico’s Mystery and Melancholy of a Street”.39 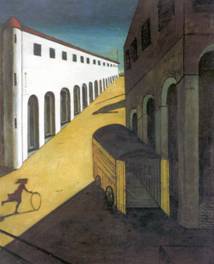 Giorgio di Chirico. The Mystery and Melancholy of a Street, 1914. 38 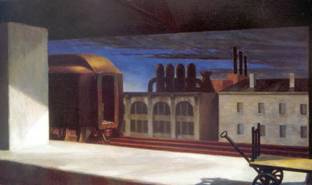 If the authors had read their Baudrillard more closely the book would have been all the better for it. Still, If we are going to have a collection of Edward Hopper’s works in our library – Troyen et. al. is as good as any I have encountered in the past twenty-five years. Baudrillard may not appear in the text of this book on Hopper – but a book with so many full colour Hopper’s makes Baudrillard’s text and images appear several times. This is the secret discourse at work in so many places in this book – so surreptitious that its author’s and editors remained unaware of it to the very end.

About the Author
Dr. Gerry Coulter is the founder of IJBS.

17 -Wilfred Seipel, Barbara Steffen, and Christoph Vitali (Editors). Francis Bacon and the Tradition of Art. An Exhibition and catalogue of the Kunsthistorisches Museum, Vienna, Austria in Co-operation with the Beyeler Foundation, Basel, Switzerland, 2003:239. Private Collection.