Unlike the discourse of the real which gambles on the fact of there being something rather than nothing, and aspires to be founded on the guarantee of an objective and decipherable world, radical thought, for its part, wagers on the illusion of the world. It aspires to the status of illusion, restoring the non-veracity of facts, the non-signification of the world, proposing the opposite hypothesis that there is nothing rather than something, and going in pursuit of that nothing which runs beneath the apparent continuity of meaning.1

The world itself seems to want to hurry, to exacerbate itself, losing patience with the slowness of things, and at the same time it sinks into indifference. It is no longer we who give the world meaning in transcending or reflecting upon it. The indifference of the world in this respect is marvelous, marvelous is the indifference of things in respect to us, and yet things passionately unfold and confuse their appearances. (The Stoics has already expressed all this with great eloquence).2 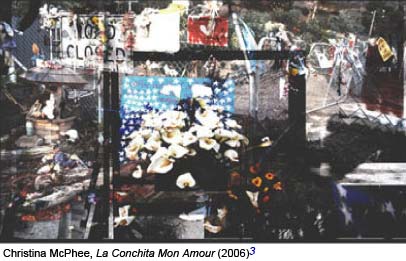 To live is to accumulate damage. That is life’s patient genius; and in our anthropic ignorance, that which we persist in attempting to eliminate.  Beneath the debris of our cultures, remains the vestige of life’s perennial upset. We are still lost along this vestigial path of becoming; in the past, our ancestors sacrificed their way to understanding.  Our nations have grown so large that our sacrifices, be they as they may, come today via satellite, rather than by the blood on our own hands.  Perhaps the narrative of sacrifice no longer is interesting, because our culture penetrates us with the horns of plenty; it is programmatically immersive: the profusion of abundance via image.

Such a transmission, an object that may be inversely sacrificial, as Christina McPhee’s La Conchita Mon Amour, dispels our securities; though we have roofs over our heads, we all remain homeless. McPhee’s La Conchita does not attempt to tell us anything we do not already know, but rather shows us that the destiny of our circumstances today, is quite often, rubbish, after all. 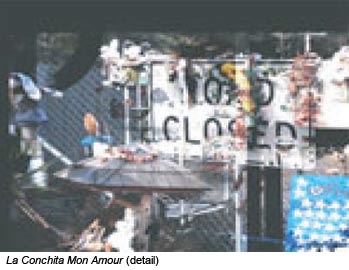 As Joseph Arthur once intimated: if Jesus once came down here to die for all our sins, perhaps he needs to come back down here and die for us again.4

There is a certain form of patience within La Conchita. To be patient is to see a thing so clearly and then, be compelled to wait for others to follow: after you have already taken a position. To be already there when the others arrive; that is a method, no? Perched on high, the aristocrats only claim dominion.  The truth is, the world will never allow us past itself; we amble along the debris of nature and culture, as in the ruins of La Conchita. McPhee’s images show us that the world knows nothing of our progress; its indifference is immaculate.

A reflection of a barren universe filled with our refuse, is La Conchita. One imagines that we are exiled from yet another location, hence we move on. The universe has taken extraordinary care to make certain that most of itself is inhospitable to our kind: the living.  One might think that the universe despises us.  Once again, after La Conchita, we are reminded that we are that which is confined to one infinitesimally small, and perhaps, insignificant corner of everything: exiles in space, l’espèce soupçonner. 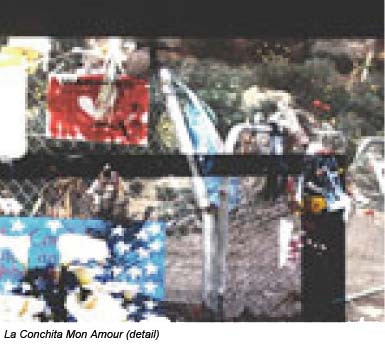 We should not quarrel with a world that reveals nothing of a destiny to us; we should return the favor of its desire for our denial. To acquiesce will never do, as the world is already full with employees; instead, compliment it with your singular denial, for it understands the stakes of that game. Indeed, its protocol is based upon such a rejection of any particularly anthropic destiny. It sheds no tear for the sky becoming landfill.

The world sheds no tear for La Conchita. It admires itself; is smitten with the audacity of one who exerts an unanswerable challenge. We need to be reminded, after all, that there is no imperative for beauty in this world. “Too much destruction” is a quantity unknown in this game. However, there is a hypothesis that arises out of our negotiation with the damage of our world: that its response to humanity will always be that of an unanswered letter. And we should keep in mind that our rejoinder to such obstinacy is usually couched in one of two ways: divinity or challenge. 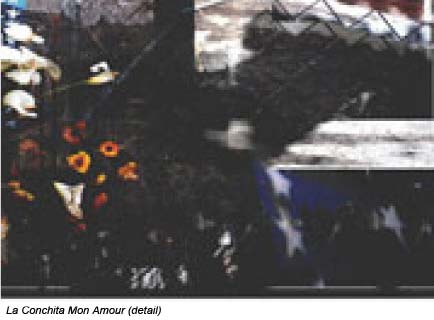 Divinity need not always draw upon the discourse of beatitude – it rather frequently, if not, as a matter of principle, concerns itself mostly with the narcissistic pleasure of purpose. Alas, the world serves no purpose, and if it does, we are certainly not its object.

Challenge, the fountain of youth, concerns itself without purpose; and in spite of reason; this is what the drones of enlightenment have forgotten. Confrontation reveals the world to itself, even while the world threatens retribution. But there is no destiny in this, only the dignity of a stand in the face of nothing, for which after all, no dignity is required – that is why the world gets along fine without much of it.
So then, divinity is an exercise in complicity; challenge is that of discovery. The world would rather be destroyed than be discovered; it guards its secrets with the force of inertia. Art that claims to be art lodges itself within this tribulation. With regard to complicity, there is perhaps, no more complicit figure in all of history than the mother of God. Bearing His son for the purpose of sacrifice, she delivers the Lamb for slaughter. Giotto’s Ognissanti Madonna (1310) reveals such a historical complicity, also while it betrays the unconscious duality of the demonic and the angelic within each melancholy angel’s face. 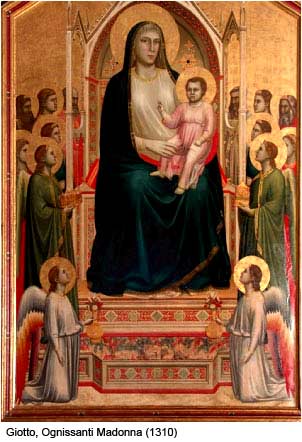 Surrounded by the desire of double agents, her image colludes in the remembrance of the universal Crusade; that which rendered a most beautiful tribulation of an absolute irrelevance in the world’s eyes. 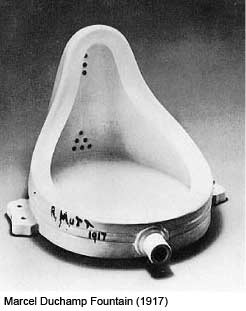 Duchamp’s urinal presents the world with a challenge in the figure of its own detritus, but perhaps that sort of thing is no longer enough. Soon we need bigger and better divergences; more awkward confrontations, more uncomfortable scenarios; a more substantial affront. Human beings scrambling to survive by jumping to their deaths from the burning buildings of the World Trade Center; the devastation of New Orleans; the car fires of suburban Paris; the sloughing off of California onto La Conchita, a reclamation project wrought by the world’s indifference to humanity: a urinal seems a bit banal in the face of all this, no?

Of course, we have had wars and plagues before, and little seems novel under the Sun and so on. But to recognize that somehow, now, we are on a discrete plateau, is really to see the difference that is generational, if somewhat duplicitous. In the past, we could only admire things whole: New Orleans, the Twin Towers, New York City, Paris, La Conchita, etc. Today we learn to admire them in pieces – a bizarre twist in the always rational Western plot. If we doubt our circumstances today, at least we can rest assured that, unlike our Renaissance counterparts, such as Jeronimo de Carranza, we no longer suspect that the solution to doubt lies in the “invincibility of truth”, but on the contrary, in the invention of truth in the face of a world that considers us suspect. An invention such as McPhee’s La Conchita, is one such clarification of our indictment in the eyes of the world. 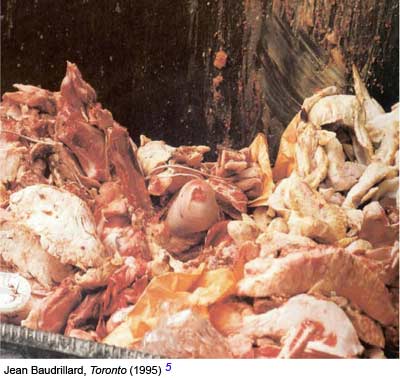 About the Author
Nicholas Ruiz III was born in New York City. He teaches bioethics, ethics and critical thought in the department of Humanities at Kaplan University. He is the author of The Metaphysics of Capital, (Intertheory Press, 2006). He is also the editor of Kritikos: http://intertheory.org

4 – Joseph Arthur. “Invisible Hands” from the compact disc Come to where I’m from, Real World Records (2000).