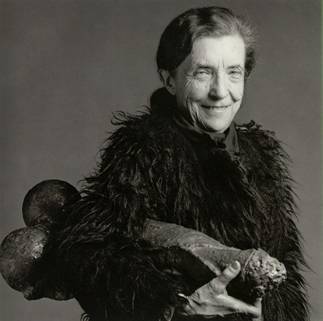 Baudrillard demanded a good deal of art: A work of art is a singularity, and all these singularities can create holes, interstices, voids, etc., in the metastatic fullness of culture ([2000] 2002:21)

The art of Louise Bourgeois stands up very well to this challenging definition in unique and interesting ways. Many of her individual works (and her oeuvre as a whole) made several holes in the extensive phallocentric culture of the Western (art) world. Mapplethorpe’s photograph of Bourgeois holding Fillette shows the sculptor herself as a sculptured work of time taking possession of the phallus (which she had created).

Against tidal waves of abstract expression she persevered from within the heartland of its promotional apparatus – New York – as a sculptor. Against the flatness of colour and form in minimalism she found her own path to making challenging art. In so doing she came to better understand her own life and family relationships. 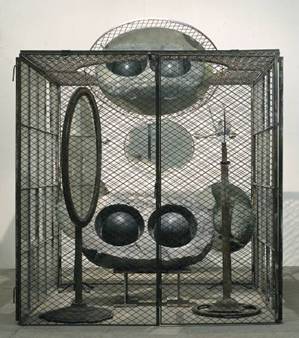 Art also provided Bourgeois with a non-violent way to channel her deep reservoir of anger. While she enjoyed a good relationship with her father later in life she despised his domineering ways over her when she was a child. She also deeply disliked the English governess whom her father used to replace her mother when the artist was still young.

Her cells address the sense of confinement she once felt and she saw others experience in the contemporary cultures of patriarchy where the voices of women and girls are often ignored. Bourgeois’ art concerned a sustained series of investigations into human psychology from the point of view of a woman. Many women, especially feminists, related very deeply with her work and she was highly influential in the past four decades. Kiki Smith, Annette Messager, and Christian Boltanski are among those who have acknowledged inspiration from her. Her influence on contemporary sculpture runs wide and deep. The artist’s biography is not present in all of Bourgeois’ works but it did play a significant role in some of her more striking efforts. 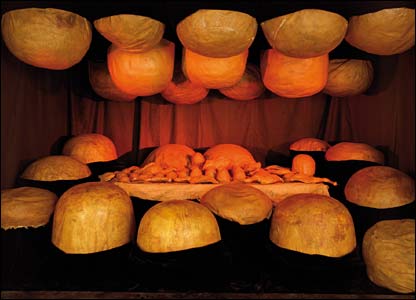 Among her more powerful works was The Destruction of the Father. She made it with chopped up pieces of meat (still attached to the bone) which were covered in plaster with an overcoat of latex rubber. She told an interviewer several years ago that “the business of pain is the business I am in” (cited in McNay, 2010). Her way of dealing with pain ripped open the vast silences experiences by daughters within patriarchal society in a way that tore holes in the wider culture. Men and women alike had to brace themselves for what might await in the next room of one of her exhibitions. 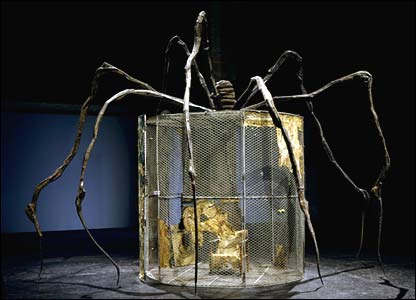 Other works such as Spider (some of her spiders were called “Maman” [mother]) were about refuge and security rather than pain. The spiders she made were in response to her own deep love and compassion for her mother and for the protectiveness she recalled from this relationship. Her spiders are not expressions of power (which she hated and said she was afraid of), but ways of identifying with the warmth of the mother / daughter relationship she had experienced as a child. The Destruction of the Father and the spiders are two sides of the outcome of her effort to problematize the modern bourgeois family as no other artist has done. A good deal of Bourgeois’ work is the art of a daughter coming to grips with earlier experiences in her life as she worked to understand and express her feelings about them.

Bourgeois was also a painter. Her Femme-Maison series represents a faceless, naked woman’s body topped by a house. Here the home is shown as replacing the woman’s individuality. Some male critics at the time did however read them as works which showed the house completing the woman! The fact that the woman remained headless, or that her head was the house passed unproblematically for these interpreters of her work. It is an interesting example of how even misguided criticism can contribute to the completion of art work (despite itself). 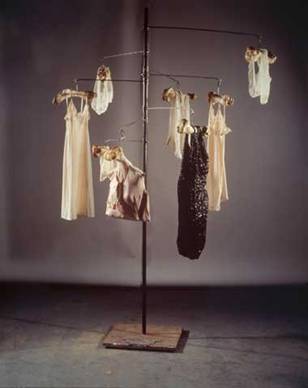 Painful emotional conditions were often represented by Bourgeois’ use of a truncated physical form such as the leg of a child being crushed by a heavy marble sphere in Untitled, with foot. The work includes the ironic words “do you love me” repeated around the base. It is a typical of the ability of so much of her work to disturb and unsettle. Untitled 1996 brings together items of women’s clothing, saved from her childhood home, displayed hanging on bones which are in turn suspended from meat-hooks. It is, if one work can be, a quintessential expression of the kind of unease and uncertainty her work provided. The oeuvre of Louise Bourgeois stands as a series of openings in the shroud of silence which long covered women’s experience of family life. It is also an example of a body of work which can sometimes leave us speechless. When she achieved this she had us trapped in a state of feelings difficult to put into words. When she has us there she has us as close, I think, as she felt to some of her more terrible memories. These are the places where art spoke through her to us.

Bourgeois produced great art for an age of deep uncertainty. She also lent her own emotional pain to numerous art objects which will continue to bear it long after she has gone. She managed to do it in a way that was challenging but never preachy. Her contribution was also a valuable one alongside of poststructuralist thought because it privileged doubt with such sincerity.

About the Author
Gerry Coulter is from Bishop’s University, Canada.