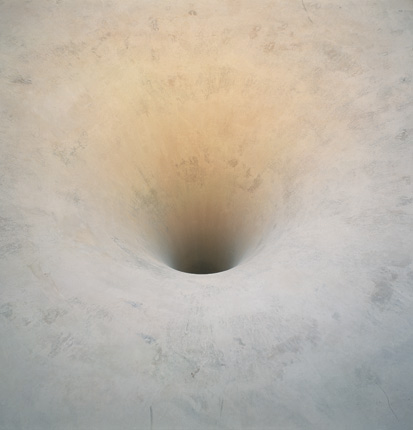 Anish Kapoor has taken his rightful place as one of the most important living artists. People tend to like Kapoor’s art because, unlike much contemporary art, it seems to like them. This book presents 500 images of his work over the past four decades (446 in colour). David Anfam’s essay “To Fathom the Abyss” is accompanied by two others: Johanna Burton’s “Namely, What Is Called Love”; Richard Deacon’s “Baltic Anish”; and Donna De Salvo’s interview: “Anish Kapoor in Conversation”.  Anfam and Burton both work as critics and art historians; Deacon is a globally known and highly regarded sculptor; and De Salvo is a curator at the Whitney in New York. The essays are intelligent and thought provoking and the interview flushes out several of Kapoor’s motivations as an artist. A chronology of Kapoor’s artistic life (by Matt Price) is accompanied by an “Exhibition History” and a bibliography. Overall the book is an overdue comprehensive monograph on a mysterious and highly contemplative contemporary artist. As “big art books” go, this is a very good one that might well serve as a yardstick for future monographs. 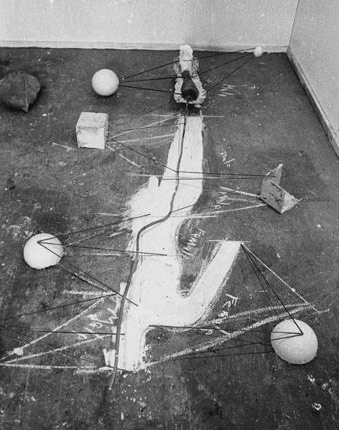 The first part of the book “Works I” includes photographs of works and the artist’s studio from the 1970’s. Here we find an artist who was, among other things, coming to grips with the profound influence of Joseph Beuys (especially the notion that all objects possess a symbolic meaning). A visual record of the artist’s performances from this time is also included. We then meet the works in pigment that brought Kapoor to a global audience in the 1980s. These include pigment covered vessels and his first use of voids and holes. We also find some of his earlier work in stone in this section. 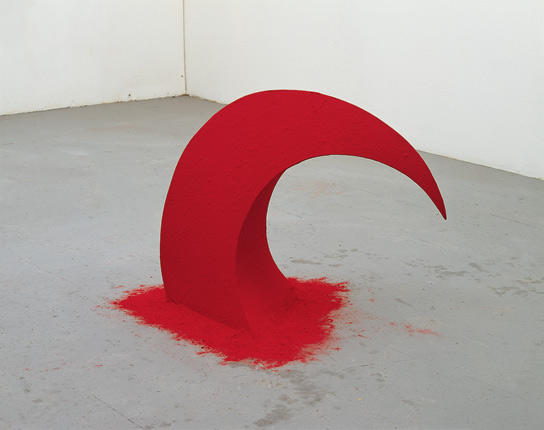 For Anfam Kapoor’s narrative is one of encounters and has nothing to do with any premodern faith in mystical transcendence as has often been asserted. For me, much of Kapoor’s early work, like his later work, creates a sense of dislocation on the part of those who encounter it. I prefer to see this as his way of touching our longing to continually be elsewhere, to be places we cannot be, as we cannot slip through the voids and interstices the artist so often makes the point of disappearance in his art. Anfam misses the sense of longing provoked by Kapoor’s art (as do the other essayists in this volume) but he does understand the importance of philosophy and ideas to Kapoor. Anfam rightly draws our attention to the store Kapoor sets in the titles of works to play on our reception of them. Despite the intelligence of Anfam’s essay I urge the reader to think against its grain to find his/her own Kapoor.  Anfam labors mightily to place Kapoor into art history although it is quite possible that he has come from elsewhere – a place before and after art. If theory may be a way out of theory (Lotringer, 2001:159), then Kapoor’s art may well point to a way out of art – especially in terms of being philosophical vehicles (more than objects) pointing us elsewhere. Anfam says that “the whole bent of Kapoor’s art articulates an age in which the body has been vaporized by the new media” (113) but it is equally likely that his work points past the age of cyberspace and digitalization. There is a timelessness about Kapoor’s work that is incredibly appealing to many. 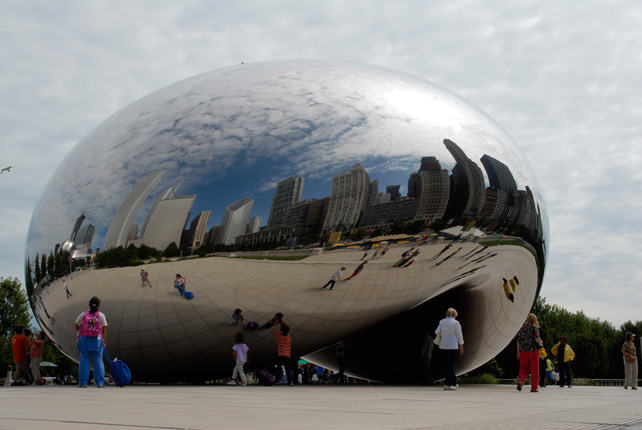 “Works II” focuses on Kapoor’s obsession with voids, interstices and passageways over the past quarter century. Johanna Burton opens her essay on Kapoor’s art with a passage from Roland Barthes which reminds us that one of the things art does is to  confront us with things we find seductive while not understanding a great deal about it. Much of Kapoor’s art can be set within this conceptualization. Burton’s use of Barthes points us to the role of the fragment in Kapoor’s work and its place in our solitary desire for the art object (162). This is an important insight when we are dealing with an artist who does not attempt to become part of contemporary culture as much as he points to things/ideas beyond the contemporary. Indeed, Kapoor’s work does not add to contemporary culture as much as it opens a void in it (see also Baudrillard, 2002:21). Burton also goes to some lengths to place Kapoor inside art history, especially his huge work Marsyas (2002-03), linking it to Titian’s The Flaying of Marsyas (1576). This is an interesting aspect of her essay but I found it unconvincing. Her writing on Kapoor’s work Cloud Gate (Chicago, 2005), is more persuasive discussing its effort to represent the ephemeral with a material sculpture.

“Works III” shows us Kapoor’s development through the 1990s in terms of the elaboration of new as well as recurring shapes and colours and the marvelous evolution of Kapoor’s understanding of light and sculpture. Reflection and refraction also come to play increasingly decisive roles in his work through the 1990s leading up to his Sky Mirrors (2006-07). 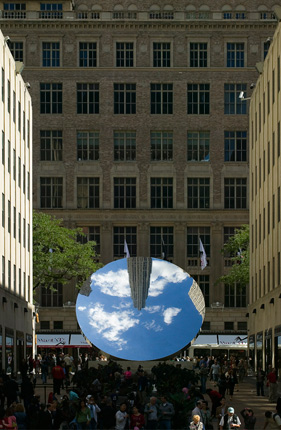 Richard Deacon writes of his experience of Kapoor’s work Taratantara (1999) when it was in situ in two locations (the gutted Baltic building in Gateshead, England and the Church of St. Jean in Aubeterre-sur-Drome, France). Deacon describes the experience of these works as one of “standing in solid air” (351). “Works IV” shows Kapoor’s work through 2009. 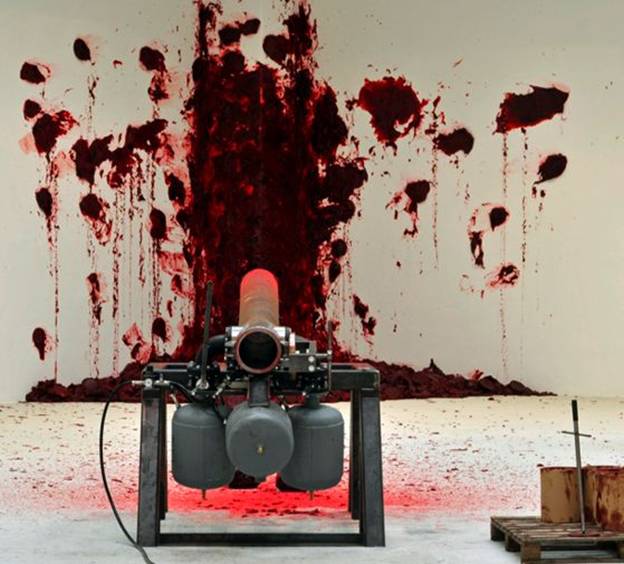 Finally, De Salvo’s interview with the artist discusses the liminal location of much of Kapoor’s work between object and not object. Well versed in post structuralism Kapoor understands that dialectics is over and that poetry is now a more powerful force. He seeks an art which he says is “deeply poetic” in which space is an artistic medium, not simply a void (403). For him it is as likely as not that meaning occurs incidentally and that is often ridiculous (406). De Salvo does a nice job in getting Kapoor, an old hand at interviewing, to say things beyond the expected.

What the book does not accomplish is a sufficient exploration of Kapoor’s thoughts on fiction and reality. If art is fiction dealing in reality as Kapoor says in the book, then what is reality for him? Kapoor’s art is an unfinished bridge over part of a great abyss that can never be traversed. It points to places we would like to be in terms of our understanding while leaving us stranded at the portal (see Coulter, 2010). In the case of his works with inviting “holes” to other places and states of being, no human, no matter how small, can fit through the opening. Kapoor’s art leaves us wanting, longing… our human dissatisfaction with all we have accomplished, no matter how wondrous, deeply frustrated. It is as close to beauty as an artist can come in a time after the word has lost its meaning. Kapoor’s art seduces us and immediately challenges us just as art has seduced and deserted him half way over that abyss. His art forces existential questions the kind of which the dullness of most contemporary visual culture discretely avoids. We are in his debt for this and the book should have faced up to this challenge with more vigor. Still, it is a sumptuous and intelligent book about an important contemporary artist who deserves many of the affections currently heaped upon him. Far too many of the big art books available in recent years lack the level of serious engagement with their subject that this book affords. I hope its influence rubs off on others coming out of houses such as Phaidon and Taschen.

About the Author
Dr. Gerry Coulter is from Bishop’s University, Canada