A longer version of this article was originally posted on the Global Game Website on March 12, 2007. 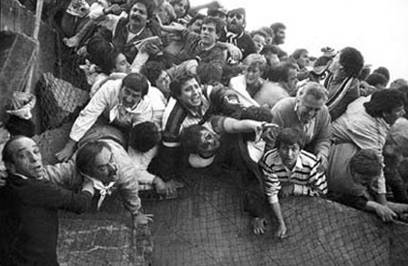 Baudrillard’s essay on Heysel emphasizes the event’s inevitability: “What no police could ever guard against is the sort of fascination, of mass appeal, exercised by the terrorist model.” Little evidence exists of Jean Baudrillard’s rooting interests in football. The French philosopher, who died March 6, left behind a corpus of cultural reflection. To him belonged clear-eyed, if not always clearly worded, explication of concepts such as hyperreality and simulation – with the latter implying more than Arjen Robben flopping around on the left-hand touchline.

Given Baudrillard’s birth city of Reims, we can imagine the young man following results of the club during his early university and teaching years. The run of results between 1949 and 1962 – eight league and domestic cup trophies, with two losses to Real Madrid in the first and fourth finals of the European Cup (1956, 1959) – may have garnered attention from one so drawn to the notion of mediated experience.

But we have no clues to such interest, only the tracings in Baudrillard’s work in translation and in the citations of English-speaking academics. Naturally, Baudrillard’s fascination with the media spectacle and with the growing separation between Western life and authentic experience relates directly to modern football, which over time has become a phenomenon to be observed –  consumed – rather than appreciated as play. In The Transparency of Evil (Verso, 1993), Baudrillard writes, “Sport itself … is no longer located in sport as such, but instead in business, in sex, in politics, in the general style of performance” In the same work, Baudrillard devotes a chapter, “The Mirror of Terrorism,” to the deaths of 39 Italian spectators at Heysel Stadium in Brussels before a 1985 European Cup final between Juventus and Liverpool. As one might expect from an original thinker, Baudrillard connects the behavior of Liverpool supporters, blamed for attacking the Italian fans before collapse of a perimeter wall led to the deaths and hundreds of injured, to seemingly unrelated social and political data: to the “state terrorism” of Margaret Thatcher’s England that, in its crushing of miners’ strikes in the north and disregard for fundaments of working-class life, including football, created pre-conditions for such violence (see Andrew Hussey, “Lost Lives That saved a Sport,” The Guardian, April 3, 2005).

Baudrillard does not absolve Liverpool fans of blame or deny the reality of the suffering, but looks at a bigger frame. He sees the violent urges of the spectators, cut off from practical means of changing their situation (“no longer participants in their own lives”), as an inevitable consequence of wishing to become an actor in life. The stage, naturally, must be one of the mass-scale “pseudo-events,” the Liverpool fans’ actions turned into simulacra, given “worldwide currency by television, and in the process turned into a travesty of itself.” Baudrillard continues in The Transparency of Evil:

How is such barbarity possible in the late twentieth century?” This is a false question. There is no atavistic resurgence of some archaic type of violence. This violence of old was both more enthusiastic and more sacrificial than ours. Today’s violence, the violence produced by our hypermodernity, is terror. A simulacrum of violence, emerging less from passion than from the screen: a violence in the nature of the image (75).

Four pages on, Baudrillard contrasts the events at Heysel with a match more than two years later. Real Madrid and Napoli contested an early-round European tie in 1987 within a nearly empty Estadio Santiago Bernabéu. Madrid fans were barred due to earlier transgressions. The scenario is familiar to us in the present, the death of a policeman amid fan rioting in Sicily in early February, for example, having persuaded Italian authorities to stage numerous matches within silent grounds. Events such as Heysel lead, in Baudrillard’s thought, to “terroristic hyperrealism,” in which “real” events occur in a vacuum, with no witnesses, but broadcast on massive screens. Baudrillard would draw heavy criticism for applying a similar course of thought to the first Gulf War in 1991, which he said “did not take place,” except as media event. With regard to football, Baudrillard continues:

This phantom football match should obviously be seen in conjunction with the Heysel Stadium game, when the real event, football, was once again eclipsed—on this occasion by a much more dramatic form of violence. There is always the danger that this kind of transition may occur, that spectators may cease to be spectators and slip into the role of victims or murderers, that sport may cease to be sport and be transformed into terrorism: that is why the public must simply be eliminated, to ensure that the only event occurring is strictly televisual in nature. Every real referent must disappear so that the event may become acceptable on television’s mental screen (79).

A constant element in the philosopher’s writing on football and more momentous concerns is the notion of distance: a separation between reality and its representation, that is, the screen, whether computer or television, that deadens life and creates a persistent metaphysical problem: What is real? What is the real football? Is it the football in which we participate or that we watch on TV?

Participation in a live street football match has fallen in importance in comparison to the glamorous performances of human gods on television. Wielders of power in hyperreal society benefit from this loss of human agency, according to Baudrillard. As Baudrillard wrote in his In the Shadow of Silent Majorities (1982): “Power is only too happy to make football bear a facile responsibility, even to take upon itself the diabolical responsibility for stupefying the masses.” The Jethart Ba’ game is not televised.