Robert McNamara – To Speak The Name Of Evil

Robert McNamara – To Speak The Name Of Evil 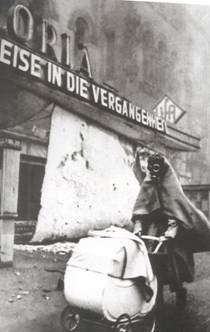 We need to make the enemy burn and bleed in every way (Winston Churchill, 1941).
We burned to death 100,000 Japanese civilians in Tokyo – men, women, and children… [U.S. General] Lemay recognized that what he was doing would be thought immoral if his side had lost … But what makes it immoral if you lose and not immoral if you win? LeMay said ‘if we’d lost the war, we’d all have been prosecuted as war criminals’. And I think he’s right – and I’d say – we were behaving as war criminals. (Robert S. McNamara to interviewer Errol Morris, The Fog of War).
In a society given over to the principle of Evil, there is no presumption of innocence (Baudrillard, 2004:87). 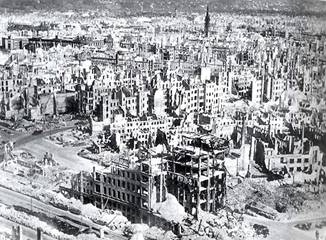 2. Dresden, aerial photo of firebombing damage
Robert S. McNamara’s CV is one of the more impressive of the entire 20th century. As a brilliant young Harvard professor he was selected to work as a strategist by the US military (he earned the rank of Lieutenant-Colonel and was awarded the Legion of Merit); after the war he became President of the Ford Motor Company; he left Ford to become Secretary of Defence under Kennedy (and later Johnson) during the Vietnam War; and finally served as President of the World Bank for 13 years. His passing provides perhaps one of the last opportunities to reflect upon some of the deeper meanings of the bombing of European and Japanese civilian populations as an accepted part of the rules of engagement during World War Two. 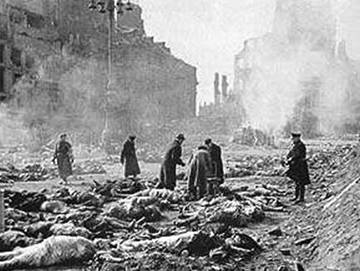 3. Dresden following firebombing
McNamara’s mainstream obituaries were preoccupied by his term as Secretary of Defence during the Vietnam War and his role in its management. Many of his obituarists took great pains to establish that he was the principle cause of its escalation in the mid 1960s. Later in life he deeply provoked many Americans with his reassessment of the US role in Vietnam. American involvement in the war in Vietnam was, he said: “wrong, terribly wrong” (1995).  Indeed, 58,181 Americans died for nothing in that war in which over 5 million Vietnamese, Cambodians and Laotians also perished [4.8 million others were exposed to Agent Orange (20 million gallons supplied by Dow Chemicals) resulting in 400,000 deaths and disabilities and half a million other birth defects]. 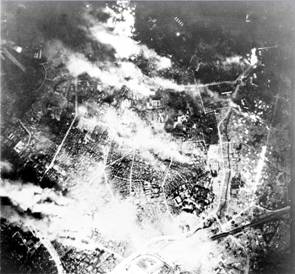 4. Tokyo burning the morning after firebombing (aerial photo)
McNamara’s reassessment of Vietnam was even less significant in my view than his admission to acting as a war criminal during World War II. Only the Germans were held to account for their actions during the trials at Nuremburg while the Allied strategy was largely seen as necessary to victory. McNamara’s role was as a close assistant and tactical analyst for General Curtis LeMay who was in charge of air operations over Japan. McNamara’s specific role in the firebombing of dozens of Japanese cities was to dramatically increase operational efficiency. His assessment that he and Lemay and others executing the bombing campaign on Japanese cities “were acting as war criminals” is one of the few such admissions ever offered by an Allied administrator of the bombings. I know I’ll not be holding my breath waiting for a similar admission from Donald Rumsfeld (Secretary under George W. Bush) for his role in the death of civilians in Iraq. 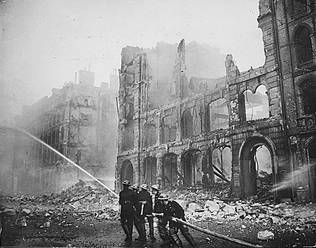 5. London during the “Blitz”
During world War II it was believed by Britain, the US, and Germany that the targeting of civilian populations would crack the morale of the people which would ultimately lead to a surrender by the government. As we saw in Britain, Germany, and Japan – aerial bombings of cities only served to make the population feel more a part of the war and more determined to persevere. This was never more the case than during the German “Blitz” on London. While the bombing of cities led to very significant short term disruptions these were temporary. It was only when US and British bombers later focused their attention on rail-lines and industrial operations that the aerial bombing strategy began to pay dividends. As Garretsen et. al. conclude: the bombing of German cities “was significant but temporary” even when looking at the later growth and development of these cities after the war (2003:21).

The cities of Japan (largely made of wood) were significantly destroyed by the operations in which McNamara served under LeMay. Errol Morris’s documentary film about McNamara, The Fog of War, identifies the percentage of cities destroyed in Japan, compared to their American counterparts by population. The fire bombing campaign of civilian populations by the US led to the equivalent of the destruction of 58% of Cleveland [Yokohama], 51% of New York [Tokyo], 99% of Chattanooga [Toyama], 40% of Los Angeles [Nagoya], 35% of Chicago [Osaka], 36% of Miami [Omuta], 41% of Nashville [Sasebo], and so on [the film provides figures for over fifty Japanese cities]. 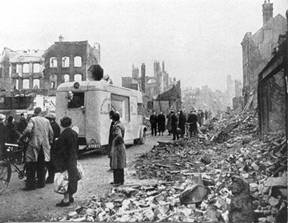 6. London (High Street) during Blitz
Well after the bombing of German cities was understood to be largely ineffective for the overall war effort, the campaign continued until the later policy shift to targeting strategic military and rail installations (in the end 58 cities which had populations over 100,000 [1/3 of the German population] were bombed). The same process took place in Japan – long after it was understood that Japanese resolve would not be broken by the firebombing of cities, the campaign continued and culminated in the detonation of American nuclear warheads in Nagasaki and Hiroshima in August 1945 – to date the only such use of nuclear weaponry on a civilian population. It remains in the view of many the most significant war crime in history to not face criminal prosecution. 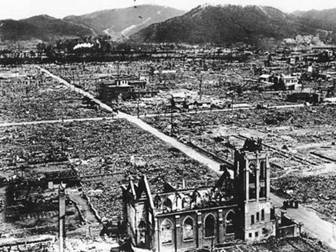 7. Hiroshima after nuclear detonation
The question is why? Why did the fire bombings continue on civilian populations even after it was widely agreed among military leaders that they were not significantly progressing military efforts to win the war? Several have offered revenge as an explanation (for the Blitz or for Pearl Harbour). I think the reasons may go deeper and help to explain why the Allies were able to defeat the Nazis. There may also be lessons concerning the struggle with Islamic extremism today. To revenge we can add two things: 1) a sense of public satisfaction (the sheer satisfaction of winning a criminally executed war wherein one has suffered and survived the agonies that are now inflicted on the opponent), and 2) Evil. The Axis powers of World War Two (Italy, Germany and Japan) were labeled the Axis of Evil by the Western Allies. Unquestionably they posed (to other Western Nations) the single greatest challenge since the Ottoman Empire engaged with European forces four centuries earlier. In the case of the Germans, the Nazi SS with its extermination campaign aimed at millions of Jews and other social outcasts was easy to label then, and still understand today, as pure evil (banal and otherwise). 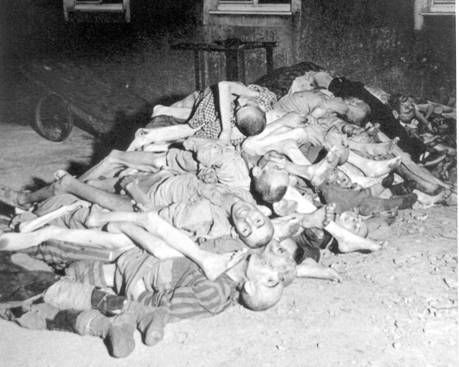 8. Lee Miller. Buchenwald Concentration Camp (1945)
The fire bombings in which McNamara was engaged and in which Germans, British and Americans alike participated ‘as war criminals’ – burning to death millions of civilians – were a clear expression of evil by Germany and the Allies. We must consider the levels of almost maniacal evil the Fascists and their War Administrators from Hitler down possessed. Not only did the Allies defeat the evil of the Nazi war criminals [and those in Japan] – they did so by acting (as McNamara confessed) as war criminals themselves. In 1944 when the bombing of civilian populations was being perpetrated on an unprecedented scale, long after it was understood that they were not significantly advancing the war effort toward victory – I believe they continued as an expression of evil. The message was clear to Japan, Italy, and Germany – you may be evil – but we are capable of as much evil, or more, than you are. When we reflect on the defeat of the Nazis and the measures taken in this victory we would do well acknowledge that the Nazi evil was defeated because, as it only could be, it encountered an enemy more evil than itself. 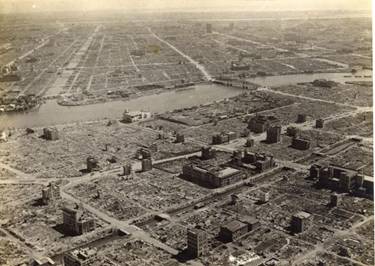 9. Tokyo after the fires were put out
The West is not invincible, but when it is challenged to its core, it can manifest an Evil who’s name it seldom speaks. Iraqis understand this evil as do those who spent time under hostile American tormenters in Abu Ghraib prison and those who were sold into captivity to American forces before arriving at Camp X-Ray at Guantanamo. Robert S. McNamara broke an important silence in the West, and in his own way acknowledged the power of evil and his involvement with it. As with all other aspects of globalization the West does nothing to the world that it has not already perpetrated upon itself first. Hardliners in the Islamic and Arab worlds who favour Jihadist terrorism today as a response to Western globalization might pause to reflect the reserves of evil flowing through Western societies. This Evil is perhaps the West’s most strategic reserve – almost a secret even to ourselves and only a few ever speak it name. Roberts S. McNamara did so in his later years and with his passing a deafening silence once again settles over the bombing of civilian populations by Germany, America and Britain during World War II. When McNamara’s obituarists become obsessed with his role in the Vietnam they serve this silence well. 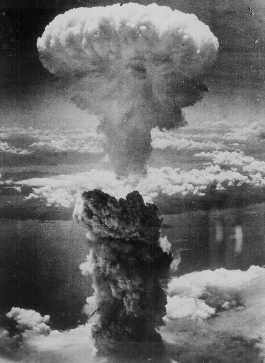