I am always already absent from my language, or absent from this supposed experience of the new, of singularity, etc.  That would mean that in order for my pronounciation of the word je to be an act of language, it must be a signal word, that is, it must be originally repeated.  If it were not already constituted by the possibility of repetition, it would not function as an act of language. If the repetition is original, that means that I am not dealing with the new (l’inédit) in language. You were reticent about saying “I am dead”. I believe that the condition for a true act of language is my being able to say “I am dead”.1

Derrida searched intensely for the motivations of his thought, writing, and speech and in doing so he raised many vital questions about how we produce truth. Rather than criticism, Derrida’s deconstruction took criticism as its object. He tampered with the code but his was not an anti-philosophy. Deconstruction was simultaneously structuralist and anti-structuralist. It could not be reduced to method – it merely disturbed norms, none more so than those of academic thought and writing. He made us more aware of things we were protecting our students from and for this reason some have sought to protect their students from him.  His was more of an example than a message and we were free to take or leave the example. I chose to leave it but from time to time there is nothing on earth like reading Derrida and I for one am glad he will be with us for as long as there are libraries and students to share his work with.

Since his passing we have observed the sad spectacle of the media lining up to stab at the corp(se)us to see if it is really dead.2  To a business devoted to paying its commercial masters with a diminishing discourse, Derrida’s proliferation of text stood as a seemingly incomprehensible challenge. Even at his passing his life and work could not be taken seriously and this tells us a great deal about the times in which we live. The only thing Derrida and the media have in common is a love of repetition, but his was of a different order than profitability. And ultimately, everything gets lost – “we write in order to keep” as he was fond of reminding us. Memory is a catastrophe and it is not merely the opposite of forgetting. “When the norms imposed by the media demand too high a price”, he once said, “then silent retreat remains sometimes the most philosophical response”.3 Silence now seems impossible.

Derrida was loathed by the many on the left for his lack of a politics they could wield. He was hated even more by the right for not speaking to them in a way that served the demand for simplicity. So many complained about his prose, but it seems to me that Derrida’s writing isn’t so much about writing as about thinking – and thinking about thinking and the hard and joyous labour that thinking about thinking is (the writing is an interesting by-product). Cambridge resisted but he did make his way into a good many other universities and he was a bright star.4 I can only feel a great pity for those who could not take him seriously. To take Derrida seriously one had to accept him as an honest person living an honest intellectual life. The worst we can say about him is that he had a weakness for the real and his constant efforts at deconstruction worked to expand the very system he denounced.5 Derrida’s affirming gesture of deconstruction was driven by a productivist impulse.

I wish you fond memories of reading Derrida, late a night when it is quiet, when his prose haunts truth, and I hope you recall that night when you either fell in love with Derrida or passed through him. For Baudrillard it was the later,6 and out of the utmost respect for Derrida and his followers we may pose a provocation and a challenge to the work which survives him. As Baudrillard pointed out fifteen years ago, little in this world is more constructive than deconstructionism:

…[it] exhausts itself in passing the world through the sieve of the text, going over and over the text and the exegesis with so many inverted commas, italics, parenthesis and so much etymology that there is literally no text left. There are remnants of a forced organization of meaning, a forced literalism of language. Deconstructing is as interminable as psychoanalysis, in which it finds a fitting partner. Deconstruction has something of the homoeopathy of difference about it; it is an analytics of trace elements.7

Baudrillard is much more interested in the power of subtraction – Derrida, ironically, in the power of deconstructive addition. In this, Derrida’s writing is very modern in its accumulation, its “going for more”. What is important however, is that in the above criticism Baudrillard pays Derrida the ultimate respect, he takes him seriously for the singularity he is and he speaks honestly to his work. In the mediated eulogies following Derrida’s death the past three months, such integrity has been a very scarce commodity.8

Since his passing people who knew Derrida have spoken often of his incredible generosity:

…at Irvine, Professor Derrida occupied 1/3 of a regular teaching position… He taught more than his share in the weeks he was with us, and was a full and valued participant in university life. His generosity with his time was simply unparalleled.9

I can only relate to the enormity of this loss through my own experience of the generosity of Baudrillard. Contemptuous obituaries are not written without purpose – they aim to hurt and the precision with which they hit their target reveals a certain inhumanity on the part of their authors. In the case of the passing of Derrida there is a bitter irony in such inhuman efforts aimed at one who valued humanity above all else. The generosity and humanity of the so called “French theorists” are two characteristics so often missed by left and right and the media.10

Have our agenda setting media passed so deeply into the posthuman capitalist machine that cynicism and contempt is the best they can offer to the death of one who thought the human as passionately as Derrida?11 The media neutralize meaning, they are sites of its disappearance and this puts them in an especially difficult position in relation to Derrida. Ironically, Derrida’s death provides the media with an opportunity to expose an important part of the death of the social in the passing of the humanity of the media. If the purpose of the media is indeed to dissuade, they have done a marvellous job of it in how they have responded to his death.12 And so one wonders if the death of Derrida works in the end to expose the media living their own death in the separation from the human. Or is it the spectre of another kind of death that haunts the media now? One wonders if on any given day in the West more university students read a French theorist or a newspaper? When the leading mainstream press embarrass themselves as thoroughly as they have in this case, can we continue to read them at all? Or do we read them merely out of a morose curiosity, watching as they experience their own death and transmigration into ghost like simulation machines reflecting the reactionary and anti intellectual press?

The failure of the mainstream media to take Derrida seriously – even in death – has been, unfortunately, all too predictable and we will no doubt see more of it. And so it is for an honest philosopher to live and die in the time of the transpolitical, transhistorical, transeconomic, and transjournalistic.13

A friend has died. The death of a friend finds its own justification a posteriori: it makes the world less liveable, and therefore renders his absence from this world less painful. It alters the world in such a way that he would no longer have his place in it. Others outlive themselves into a world which is no longer theirs. Some know how to slip away at the apposite moment. Their death is a stroke of cleverness: it makes the world more enigmatic, more difficult to understand than it was when they were alive – which is the true task of thought.14 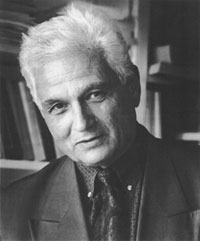 About the Author:
Gerry Coulter is founder and editor of IJBS.

1 – Jacques Derrida. Discussion with Roland Barthes, Georges Poulet, Jan Kott, Jean Hypolite, Lucian Goldmann, Tzvetan Todorov, Richard Macksey, Paul De Man, Pierro Pucci, Jean Pierre Vernant, and Richard Schechner following an address from Roland Bathes: “To Write: An Intransitive Verb?” given at the symposium: The Languages of Criticism and the Sciences of Man. John’s Hopkins University Humanities Center, October 18-21, 1966. In Richard Macksey and Eugenio Donato (Eds.) The Structuralist Controversy: The Languages of Criticism and The Sciences of Man. Baltimore: The Johns Hopkins University Press, 1972:155-156. Sylvere Lotringer and Sandy Cohen point out that this colloquium is “often said to have been the real beginning of French theory in America” where “Derrida could postulate that with language, repetition, not the subject who speaks, is original”. See Sylvere Lotringer and Sande Cohen. French Theory in America. New York: Routledge, 2001:3.

A reply to the New York Times obituary from several members of the University of California at Irvine (and others) may be viewed at: http://www.humanities.uci.edu/remembering_jd/uci_letter.htm (no longer active 2018)

An obituary of remarkable quality was published by The Economist. October 21, 2004. See: http://www.economist.co.uk/people/displayStory.cfm?story_id=3308320 (no longer active 2018).

10 – For something else Baudrillard and Derrida share see: Karen McMillan and Heather Worth. “In Dreams: Baudrillard, Derrida and September 11” in Victoria Grace, Heather Worth, and Laurence Simmons (Eds.), Baudrillard West of the Dateline. Palmerston North, New Zealand: Dunmore Press, 2003:116-137.

11 – One especially relevant passage that comes to mind:

If death comes to the other and comes to us through the other, then the friend no longer exists except in us, between us… …being-for-death. …But I can have the experience of “my own death” by relating to myself only in the impossible experience, the experience of the impossible mourning at the death of the other.  It is because I “know” that the other is mortal that I try to keep him or her in me, in memory… being-for-death is always mediated… in the experience or in the “non-experienceable” structure of impossible mourning.  Mourning would be more originary than my being for death. Jacques Derrida. “Istrice 2: Ick bünn all heir:  Interview with Maurizio Ferraris”. Published in Aut Aut  235, January-February 1990. In Elizabeth Weber. Points: Interviews With Jacques Derrida, 1974-1994. Translated by Peggy Kamuf and others. Stanford University Press, 1995:319-322.

12 – For myself I can say that it was reading Derrida’s obituary that brought me to the New York Times for the first time in over a year. What I found there certainly dissuaded me from wanting to view the Times again any time soon.

13 – “Trans” here is used to mark a point after history, economics, politics, and journalism are knowable as they once were. A point not yet “post” but riddled with radical uncertainty.