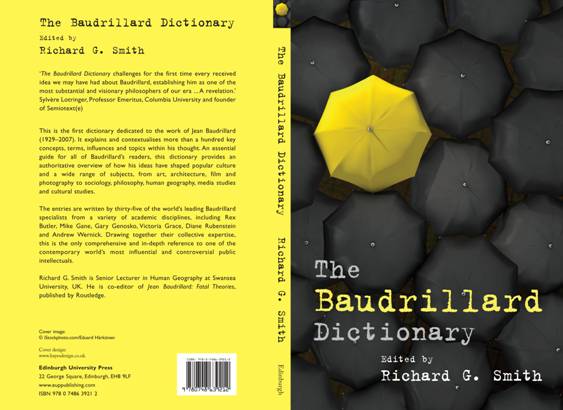 The Baudrillard Dictionary was published in the July of 2010 in hardback and paperback simultaneously by the Edinburgh University Press and Columbia University Press. Further details are available at the publishers’ websites.

Baudrillard is one of a generation of poststructural theorists – contemporary with such thinkers as Gilles Deleuze, Jacques Derrida, Michel Foucault, Félix Guattari and Jean-François Lyotard – whose writings have both fascinated and bewildered. Baudrillard’s writing style, methodology, inventiveness and particular mode of theoretical and critical inquiry require close attention. Indeed, Baudrillard’s oeuvre employs a technical language and specialised vocabulary of theoretical terms, and is complex in both its form and in the nature of its development. Thus this dictionary has been crafted to serve as an expert guide for Baudrillard’s readers as to the jobs, or tasks, that his words perform. The 105 entries are written by thirty-five of the world’s leading Baudrillard specialists. By drawing together the expertise of these scholars – from many academic disciplines – the dictionary provides not only comprehensive coverage and lucid accounts of Baudrillard’s concepts and themes, it also maps out the impact of Baudrillard’s thinking across the world in a wide variety of contexts and in numerous areas of intellectual inquiry and endeavour. […]

Baudrillard did not set out to produce a theory that could be deployed and applied in a dogmatic fashion. There is not a Baudrillardian school of thought as such, despite the large number of commentators on his work. Rather, Baudrillard’s thought is best considered as an ‘attitude’ that emerged as he blazed his own idiosyncratic path, ahead of the curve, borrowing, adapting and inventing a constellation of words and concepts to chart the contours of an age that he saw as increasingly impoverished as a consequence of mediatisation and virtualisation. Accordingly, the aim of this dictionary is not so much to produce a portrait of Baudrillard – a task that has been accomplished in other works (for example, Butler, 1999; Gane, 1991a, 1991b, 2000a; Genosko, 1994; Kellner, 1989; Lane, 2009; Levin, 1996; Merrin, 2005; Pawlett, 2007) – or to bury him beneath a welter of words, but rather to offer a multitude of passageways or journeys – from entry to entry – through an oeuvre that has no centre.

A list of passage-words (‘passwords’) is provided at the end of each entry, so that any entry with a significant connection to any other is highlighted. These ‘passwords’ function as paths, passageways or ‘shifters’ that enable the reader both to trace specific arguments, concepts, developments, positions and themes back and forth through Baudrillard’s oeuvre, and to appreciate how Baudrillard’s words ‘are “passers” or vehicles of ideas’ as they ‘metaphorize and metabolize into one another by a kind of spiral evolution’ (PW, xiii). It is through this passing from word to word, from concept to concept, from term to term, from entry to entry, that the dictionary both organises and holds together a seemingly disparate array of materials in an overall configuration, and in so doing, demonstrates the conceptual rigour and integrity of Baudrillard’s texts.

In addition to the ‘passwords’ the dictionary also contains a number of ‘link entries’. These linking entries serve as an index to the dictionary: not a concordance like Coulter’s The Baudrillard Index  or an exhaustive index of the traditional kind that one might typically find at the end of a book, but rather a specific index of those authors, issues and examples that are commonly associated with Baudrillard. Overall, the link entries have a dual purpose: to serve as additional and alternative entry points into the dictionary’s content, and to locate Baudrillard’s thought in the context of those wider debates with which he engaged or became associated.

The Baudrillard Dictionary is available for purchase from either the publishers’ themselves or from any number of booksellers across the world.

About the Author:
Richard G. Smith is Senior Lecturer in Human Geography, and Co-Director of the Centre for Urban Theory, at Swansea University in the UK. He is the editor of The Baudrillard Dictionary (Edinburgh University Press, 2010), and co-editor of Jean Baudrillard: Fatal Theories (Routledge, 2009). His writings on globalization and cities, published over the past decade in books and such journals as Cities, Urban Geography, IJURR, Annals of the Association of American Geographers, Environment and Planning A, and Progress in Human Geography, have pioneered new network approaches. His current research concerns the poststructuralist city. Richard G. Smith is from the Centre for Urban Theory, Swansea University, UK.