The Enigma of Translation

The Enigma of Translation

They took the hypothesis of the virtual for an irrefutable fact and transformed it into a visible phantasm.2

The Storm and The Fall opens with an image of twin towers burning. Having had your fill of 9/11, you barely pay attention to the image until you notice that it is not of New York 2001 but of Sarajevo nine years earlier: the twin Unis Towers after Serbian shelling. Lebbeus Woods explains, “the siege of Sarajevo was a harbinger of tendencies, such as toward the monological, that eventually, but inevitably, come to the centers of contemporary culture. In this sense, the terrorist attack on the World Trade Center towers was not only forecast by the terrorist attack on Sarajevo, but can be understood as one with it”.3 The image is offered as a burning palimpsest transporting Sarajevo to New York, translating one event into another. 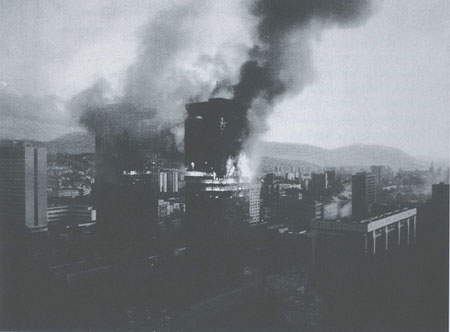 The book enacts translation: to translate5 is to carry from one place to another; just as drawings accompanying the preface are reproduced from another cloth-bound journal imparting a curious displacement from the page at hand to the representation of another. You are carried, in a choreography of fall and redemption,6 across three projects with telling titles: The Storm, The Fall and finally a proposal for Ground Zero, The Ascent, the tallest building in the world that would remain tallest forever as it would be a perpetual work-in-progress (Frank Lloyd Wright’s mile high skyscraper overtaken by an elegy).

Lebbeus Woods is well known among architecture aficionados for his visionary drawings (Lebbeus, fittingly, means “a man of heart; praising; confessing”).  But unlike mainstream architectural drawings, which are a means to a realized building, his delineations have no intention of undergoing such translations. Paradoxically that has only increased their consumability because their audience is left with the enigma of translation; of imagining them as built spaces and as spaces of inhabitation. (The book is aptly dedicated to Heinz von Foerster the cybernetician of self-referential systems, whose motto was: The world, as we perceive it, is our own invention).7

As his post-apocalyptic inventions are not in transit to built form, they paradoxically turn their architect into a tourist of trauma, an apocalypse-seeker of cities destroyed by earthquakes (San Francisco), war (Sarajevo) or economic sanctions (Havana). But the natives are a reluctant audience of such privileged visions; victims of urban violence have no stomach for avant-garde bio-high-tech masochistic-structures, preferring the soft comfort of reconstruction and healing. After two decades of breathtaking drawings (Giovanni Battista Piranesi meets the Blade Runner), the architect endeavours to translate his drawings to ephemeral structure. The book documents two attempts.

Woods misunderstands his own oeuvre by asserting that he has only recently made a shift “from objects to fields”.8 On the contrary, his drawings of unbuilt architecture were all along riveting anti-environments, i.e. unbuilt fields against which the objects of built architecture were witnessed. “The real significance and use of the arts in Western culture has always been its role of supplying anti-environments”.9 The refusal to regard drawings as conduits to building had, in effect, redefined “their representational role as similar to that of early twentieth-century paintings, in the sense of being less concerned with their relation to what they represent than with their own constitution”.10 Hence, ironically, at the moment when the visionary drawings verge on becoming the closest thing to Lebbeusian construction drawings, i.e. as instigators to the installation, they lapse into the operational mode of conventional architecture displacing the architect from direct and intimate access to his work as he “steps back and lets collaborators do the work”.11 It is at this stage that he is in the danger of the opposite shift: from field to objects; the drawings then representing something other than their own constitution.

The Storm disappoints. In attempting “to bring the destructive forces of the storm under the scrutiny of reason”12 the installation of rods and cables ends up succumbing to that scrutiny, hearkening to the tensegrity structures of 1960’s. It is as if the storm itself was ethnically cleansed of its ravages, leaving in its wake pristine abstraction of CNN and not the flesh and gore of Al Jazeera. The Fall, on the other hand, is exquisite in its excess and its paradoxical strategy of a multitude of rods rising to depict a fall. Both installations, horizontal and vertical (the demarcating horizon and the upright body), are fabricated of linear elements, in semblance to the act of drawing. Though these lines be not of ink or graphite but of aluminium and cables, and they be drawn not on paper but in space, their analogical strategy suggests that the prime contribution of Lebbeus Woods drawings all along have been more to mode of representation than to spaces represented or inhabited.

It is that operational mode that is evident in the monograph of architect Guy Lafranchi, who according to Wood’s introduction “is an urbanomad, and he is here to stay”.13 At times you wish that were a literal statement and not a witty oxymoron. Perhaps writing14 is too sedentary a medium for a hyperactive nomad. The book describes six unbuilt proposals each headed with an incongruous full page illustration of a navigating device giving the site’s coordinates, altitude and population, none of which appear to have much bearings on the project descriptions that follow. With a text that reads as a translation and even with the periodic unwarranted intrusion of the pop art navigator, all is forgiven when you examine the drawings, the bilingual journal pages with sketches of inhabited spaces, and the models (unpopulated, save for the quaint silhouettes of Corbu-man with his tireless upraised hand, appearing nostalgically). Lafranchi takes the Lebbeusian representational mode to represent spaces and to inhabit them. He is adept at moving with conviction from an illustrated journal entry to the embodiment of the concept in a competition model (e.g. Grand Egyptian Museum). 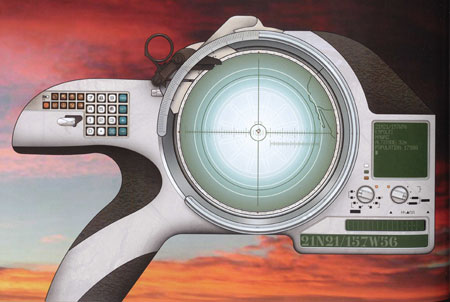 Guy Lafranchi has been collaborating with Lebbeus Woods for a decade. You will spot him in Wood’s monograph, next to The Fall mock-up.16 But the image we began with is also obliquely and unwittingly related to Lafranchi’s Navigators. Contrary to Woods protestation that the “urbanomad is not a ‘global’ architect”17 each project of Lafranchi is in a different country, from Switzerland to South America, Egypt to North America. A global practice, whether architectural or otherwise, is the outcome of the same globalization that allowed Lebbeus to map Sarajevo on to New York and that led Baudrillard to declare that 9-11 occurred because “the unbounded expansion of globalization creates the conditions for its own destruction”.18 Paradoxically the very deregulation that allows for a global practice “ends up in a maximum of constraints and restrictions, akin to those of a fundamentalist society”.19

In his Foreword, Eric Owen Moss repeats ten times, in three pages, his sentiment that “Lebbeus Woods is an archetype”20 before mapping the archetype’s heroic aspirations onto that of an older one: James Joyce’s Stephen Daedalus. The unrelenting backward momentum of the Foreword carries us to the Labyrinth of the mother-of-all-archetypal-architects: Daedalus. Inside the labyrinth, fellow inmates such as Jean Baudrillard, testify that though there was once an outside, from which they entered, it has long since disappeared. Now there is only an excess of inside. What little outside remains is difficult to recognize as the walls of the labyrinth have morphed into a mobius strip twisting front to back and outside to inside. It leaves Lafranchi lamenting, “We see more and more virtual reality; architecture is becoming escape from reality”.21 Even two decades after the thinker declared that we had reached escape velocity, the architect, on the other hand, doomed to optimism like the perpetual WTC tower of Lebbeus Woods, insists, “reality could/should be brought back into built space”.22

Labyrinth residents are sceptical of invented labyrinths; to invent one is to deny that you are a denizen of one that already exists. For Woods to draw post-apocalyptic spaces as prophecies, to give them form, to seek out zones of tragic occurrences, to inhabit them, is to deny that the greater urban apocalypse has long occurred. If tensegrity were islands of compression in a sea of tension, then look around you: the superstore box implodes in a sea of parking lots; mini-black-holes of decay and blight dot the urbanscape; in downtown cores graffiti is high art. Apocalypse overtook us because of its sheer banality; it needs to be drawn out23 rather than drawn.

About the Author:
H. Masud Taj is from the School of Architecture, Carleton University, Ottawa, Canada.

3 – Lebbeus Woods. The Storm and The Fall. New York: Princeton Architectural Press, 2004:20-21.  A sentiment that resonates with Baudrillard’s take: “With its totalizing claim, the system created the conditions for this horrible retaliation”. (See Jean Baudrillard. “This is the Fourth World War”,  Der Speigel interview in  2002; International Journal of Baudrillard Studies. Volume 1, Number 1 (January 2004). Translated by Samir Gandesha).

5 – From the Latin: translatio.

6 – Lebbeus, after all, was one of the twelve disciples at the Last Supper.

10 – Robin Evans. Translations from Drawing to Building and Other Essays London: AA Publications 1997:160.

14 – Ibid.: 13 to 15. The opening project, for instance, has a plethora of incomplete sentences with trailing ellipses chasing omissions, 72 stuttering dots turning pages into sieves while 42 brave hyphens strive to keep the text from leaking, even as words inexplicably turn on their capitals: SEMICAUSALITY, FEELING, CENTRAL, MYTH.

23 – Middle English Apocalipse, from the Latin Apocalypsis, and from the Greek apokalupsis, revelation. Apocalypse, from apokaluptein, to uncover: apo-, apo- + kaluptein, to cover; see kel- in Indo-European Roots. http://tinyurl.com/admwr