Note: This article originally appeared in French in Liberation, November 18, 2005.

Something in all men profoundly rejoices in seeing a car burn.1

Fifteen hundred cars burned on a single night and then, nine hundred, five hundred, two hundred, before “normalcy” was reached again (when ninety cars on average are torched every night in this gentle land of France). A new eternal flame, similar to the one at the Arc de Triomphe, burns in honour of the Unknown Immigrant.

We are no longer exceptional. The French model is collapsing but so too is the entire Western model, not only from external attacks – acts of terrorism or Africans storming the barbed wire at Melilla2 – but now from within.

The first conclusion to be drawn from the autumn riots cancels the pious official homilies. A society which is itself collapsing has no chance of integrating its immigrants, who are both products and cruel analysts of our decay. We are all, in this harsh reality, faced with a crisis of identity and disinheritance; the cracks opening in the Paris suburbs are but a symptom of the separation a society that is at war with its own. As Hélé Béji3 has remarked, the immigration question is merely a starker illustration of the European’s exile within his own society. Citizens are no longer integrated into European (or French) values, and all we do is palm them off on others. 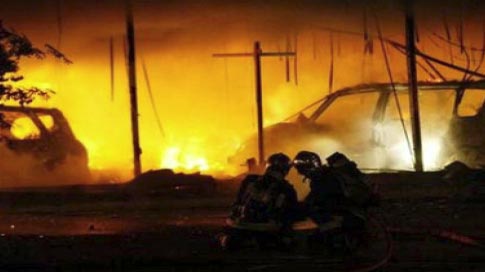 The official position is integration but integration into what? The sad spectacle of successful integration – into a banalized, technized, upholstered way of life, protected from self-questioning – is to truly be French. To speak of integration in the name of an indefinable notion of France is merely signals the lack of such a thing.

French and European society,  by the very process of socialization, emanates daily the unrelenting discrimination of immigrants and others. This is the unequal bargain of democracy.

Our society faces something more harsh than any external threat – that of its own absence and loss of reality. Soon our society will be defined only by the foreign bodies that inhabit its margins – the excluded – whose violent interruption reveals that it is coming apart and opens the possibility of awareness. If French or European society did succeed in integrating them, it would cease to exist in its own eyes. 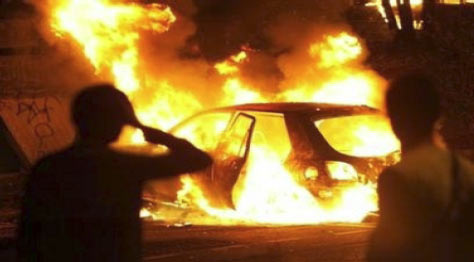 French and European discrimination is only a smaller portion of a larger  divide which, under globalization, is bringing two irreconcilable worlds to face each other. International terrorism is only a symptom of a globalizing power at war with itself.

In the proposed solutions, delusion appears at all levels – from the suburbs of Paris to the Mosques of Islam – the dream that raising everyone to Western living standards will solve the troubles. The divide is far deeper and the Western powers cannot bridge it even if they actually wanted to (a doubtful assertion in any event).

The very survival and superiority of the West prevents them from closing the gap, despite all the talk of universal values. And so a collection of forces dream of destroying the West. 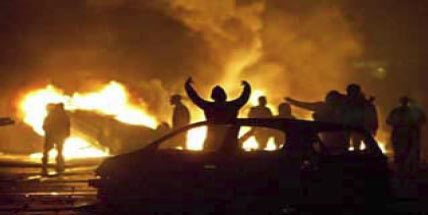 France and Europe no longer control events or hold the initiative as they did for centuries. We are at the mercy of a succession of blow-backs which could not be foreseen.

Those who condemn the West’s ideological bankruptcy may remember that God smiles at those who denounce the evils of which they are the cause. If the irruptions in the Parisian suburbs are to be linked to the global situation – and this has not been discussed – they can be connected to another recent episode which was misrepresented in much the same way: the “No” in the European Union’s Constitutional referendum.

This “No” was also the voice of those jettisoned by the system of representation – exiles also – like the immigrants themselves, from the socialization process. There was the same  unrestrained irresponsibility in the act of scuppering the EU as in the young immigrants burning their own neighborhoods and schools as did blacks in Watts and Detroit in the 1960s. Many are now inhabitants of a France that offers them no definition of national belonging – “disaffiliated”, as Robert Castel put it.4 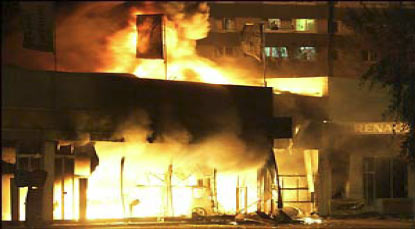 It is a short step from disaffiliation to defiance. The excluded – the disaffiliated, whether from the suburbs, immigrants, or native-born – at some point channel disaffiliation into defiance and move to the offensive. It is the only way to stop being humiliated, disaffiliated, or taken in hand. In the wake of the fires of Autumn, mainstream politicians and sociologists spoke of integration, better employment and more security.

But these rioters do not wish to be  reintegrated in these ways. The rioters appear to consider the French way of life with the same condescension or indifference with which it views their way of life.  Do they prefer to watch cars burn to driving them? Is their’s a reaction to an over-calculated solicitude which instinctively feels the same as exclusion and repression?

Western cultural dominance continues only as long as the remainder of the world desires to join it. At the least sign of refusal, the slightest receding of that desire, the West loses its seductive allure in its own eyes.

Today the very best the West has on offer – cars, schools, shopping centres – are being torched.

Even nursery schools are burned: the failed tools the car-burners were to be integrated and mothered. “Fuck your mother” might be their slogan.5 And the more there are attempts to “mother” them, the more they will burn.

Nothing can stop politicians and intellectuals from viewing the riots of autumn as lesser happenings on the road to the democratic reconciliation of all cultures. Yet, everything indicates quite to the contrary, that these are successive phases of a revolt whose end is nowhere in sight.

About the Author
Laura Nyssola is from Bordighera, Italy.

5 – “Nique ta mère!” (literally, “fuck your mother!”), was the original title of this article as it appeared  in Liberation on November 18, 2005: http://www.liberation.fr/page.php?Article=339243 (link no longer active 2019). A thoughtful commentary on this choice of wording appears in: Mutte Beta (Meta Mute): Culture and Politics After the Net (February 28, 2006): . “…he [Baudrillard] probably picked this up from watching the film La Haine [Hate], (the phrase is grafitti’ed on a door and also verbally hurled at a police officer in one key scene) of which incidentally the French cabinet held a special screening upon its release in 1995 to understand the troubled zone which presumably remained too remote for them to visit in person. La Haine was a direct response to 25 years of violent confrontation between the inhabitants of the banlieue and the agents of the state and specifically to the shooting of a sixteen-year-old Zairean youth, Makomé Bowole, in police custody in 1993.” See: http://www.metamute.org/en/node/7322 (link no longer active 2019).