The burka is not a sign of religion, it is a sign of subservience … it will not be welcome on the territory of the French republic (French President, Nicolas Sarkozy, July 2009).

The immense hypocrisy of all those who denounce the veil but are quite at ease with universal pornography (Baudrillard, 2006:89).

It is not only the burka [burqa] (a garment which covers the entire body with only a small mesh area or slit to see through), which is at issue in France today. It is the presence of Muslim women in public spaces wearing any traditional form of facial covering (the veil) at which Sarkozy directs his anger. As far as the French leader and his UMP (Union for Popular Movement) party are concerned the word “burka” has been chosen to also represent the Niqab (a veil for the face that leaves the area around the eyes clear [although a separate veil for the eyes may be worn]). The Al-Amira or Shayla (two piece veils which leave the face uncovered), and the Chador or Khimar (cape like garments which can cover part or all of the body), seem to fall outside of Sarkozy’s suspicion – so long as they do not cover the face. A government commission has been struck to study the wearing of burkas and veils. Benoit Hamon, spokesperson for the French Socialist Party (which has thrown itself under Sarkozy’s train on this issue), told Le Monde that his party supports a ban on both the burka and the veil (Fouquet, 2009). Once again it is difficult to tell the Right from the Left in France. Wearing any version of the Al-Amira, Shayla, Chardor or Khimar (commonly lumped together as “headscarves” in France), has been grounds for expulsion from a public school in France since 2004 (regardless of whether or not the girl in question is a Muslim). The same rule applies to the yarmulke and the turban.

Oddly it is Muslim women in France (those who appear wearing the veil in public), who have become the contemporary emblem of the “white man’s burden” (Kipling, 1899). These women who typically move quietly and unobtrusively through the streets, parks, shops, and public spaces of France have a new self appointed savior dedicated to their liberation – no less than the French President.

Sarkozy has thrice infuriated Muslim critics in the second half of 2009. It began with his pronouncement on the ‘burka’ in the summer, was followed by a (November) defence of Switzerland when it became the first democracy in Europe to ban the building of Muslim minarets (Switzerland had four at the time of the vote). “Instead of condemning Switzerland out of hand” Sarkozy said, “we should try to understand what they meant to express and what so many people in Europe feel, including people in France” (Guardian, 2009b). Personally, having seen posters used by the winning side in the campaign I think it rather clear what the Swiss sought to express. The use of the image of a veiled woman in the anti-minaret campaign must have appealed to the likes of Sarkozy and his followers in France. 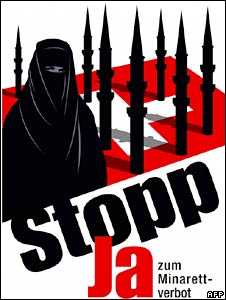 More recently Sarkozy has called upon France’s 5 million Muslims to exercise “humble discretion” in the observance of their religion. What few are saying is that Sarkozy is confident (and probably correct), in his assumption that he has the majority of the non-Muslim French populace behind him. Newspaper polls in France, Germany, and Spain show significant majorities supporting a ban on minarets and a kerfuffle has ensued following the unveiling of plans to build a grand Mosque in Marseille (which includes a 25 meter Minaret). 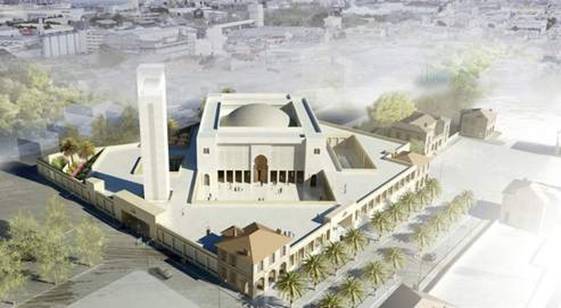 The burka debate forces “liberated” Muslim women into bed with a strange defender of liberalism – the same President who has refused women’s pleas for a Ministry of Women’s Affairs to deal with deeply entrenched sexism in France’s public and private sectors. He is also the President who has rejected requests for a meeting by the leaders of women’s groups who help women who have been victimized by sex-trafficking rings. Sarkozy’s concerns for Muslim women fits unevenly alongside his lack of action on the Muslim unemployment rate (three times what it is for the Caucasian French), or that two thirds of the population of French prisons is Arab and or Muslim. He grins belligerently when his political opponents suggest an affirmative action program for France’s Arab and Muslim population. Yet Sarkozy says the burka turns Muslim women into prisoners and serves as a “sign of debasement” (quoted in the Guardian, 2009a). His Urban Affairs Minister Fadela Amara (born in France to Algerian parents), agrees adding: “the burka is a prison, it is a straight-jacket” and “the insignia of a totalitarian political project that advocates inequality between the sexes” (cited in Kambara, 2009). Neither Amara nor Sarkozy seem to know what to think about women who freely choose traditional Arab and Muslim costumes in France? Do women who freely choose to wear a veil no longer have a public place in France? Can a contemporary liberal democracy such as France actually contemplate such a ban? Holland, as it turns out, may bring in a similar ban of its own before France! All is not well, once again, in White Europe. Ironically, the campaign to ban the veil in the West is every bit as fundamentalist as any Islamic country which forces women to wear the veil in public.

Fear of fundamentalism (or perhaps merely a generalized “Islamo-phobia”), far more than women’s rights, lies at the heart of the matter. What a silly place is the face of women to determine the acceptability of a culture or a religion. If every Muslim woman in France appeared unveiled tomorrow (90 percent of them already do), would the French failure to integrate its Arab and Muslim populations suddenly be remedied? Will the overall status of women in France be improved by more than one iota by discarding the veil? Would Muslim women’s education and income levels in particular rise with the lowering of the veil? Would those who seek to limit the freedom of their Muslim sisters, mothers, and daughters suddenly be less able to do so if the veil were removed? Hardly, it is likely that a ban on the veil would see the freedom of women in strict fundamentalist Muslim households even more severely limited. Perhaps a quick trip to the grocery but fewer outings to the park. The depth of misogyny in Arab and Muslim cultures makes even some right-wing French conservative males blush.

I’m not certain how much Sarkozy and his ilk have thought the issue through – or how much they care to as veiled under the burka issue is that clammy French racism Baudrillard so loathed. In a way, a ban on Muslim women’s body covering is, at heart, a case for de-facto segregation. Sarkozy and others supporting the ban do know full well (from numbers generated by their own Government Ministries), that the 2004 law banning the “headscarf” from schools forced many Muslim girls to leave the public secular system and to enroll in an Islamic school where the hijab is worn. Sarkozy’s true constituency lies elsewhere than Muslim women.

Sarkozy is of course in tune with the times. In 2008, in the land of liberty, equality, and fraternity, the French Council of State [the final panel of arbitration between a citizen and the government], upheld a Marseille court decision to deny a Muslim woman (Faiza Mabchour), citizenship on the grounds of “insufficient assimilation” (a strategy often used in Switzerland). The 32 year-old woman in question wears a burka, is believed by the court to live in submission to her husband (a French citizen), she is the mother of their three children (born in France). In its decision (in a land where the constitution guarantees freedom of religion) the Council said: “She has adopted a radical practice of her religion, incompatible with essential values of French community, particularly the principle of equality of the sexes”. Today it seems that the burka, the veil, or even merely a submissive lifestyle are grounds for the denial of citizenship. One French law professor controversially wondered if the Council of State’s ruling means that “women who’s partners beat them are not worthy of French citizenship?” Another law professor (Ronald Sokol) opined: “One cannot help but wonder if Faiza Mabchour had been named Haruko Tanaka and appeared before the Council of State in a silk kimono walking five paces behind her French husband, whether the same verdict would have been reached” (Sokol, 2009).

When a government seeks to tell its citizens what can and cannot be worn in public it adopts a remarkably illiberal position. Is the veil to be the altar upon which French (and Western) liberalism is to be sacrificed? [Many have believed for years that 9/11 accomplished this feat]. What would make the entire affair appear silly (if it were not so pathetically dim-witted), is that only about 1/25th of Arab or Muslim women in France wears a veil over her face! (Yusuf, 2009). The actual sight of a full burka being worn in public is extremely rare in France. I imagine Baudrillard is giggling in his grave in Cemetery Montparnasse as Western powers seek the ability to determine which interpretations of Islam are to be considered acceptable.  Perhaps Sarkozy is buckling under the weight of power and has become hysterical?

The Paris fashion world has weighed in on the issue with some designers (Ricci and Dior have led the way), and we now see the traditional Arab and Muslim Abaya on the runways of Paris. I’m not quite certain who’s side the designers are on. 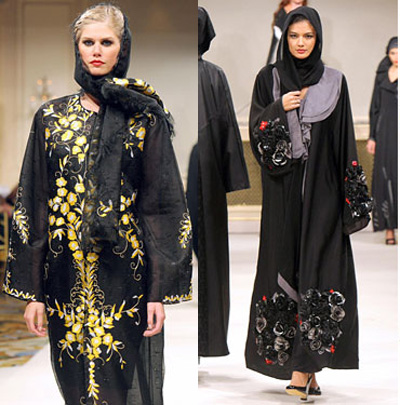 Of course it is possible that France has both the fashion designers and the president it deserves. More from some of Sarkozy’s supporters can be found on the xenophobic website www.jihadwatch.org. Here one finds enlightening commentary such as: “Wearing a burka should be enough reason to deny citizenship. In fact, just being a Muslim should be enough” (posted by “ImNoDhimmi” July 12, 2008). Places like jihadwatch (there are many others) have a story to tell about fear and prejudice. Despite Sarkozy’s rhetoric of freedom and dignity – and those who make burkas and veils into religious issues (there is nothing in the Koran which demands women wear even a veil) – what we find hidden under the “burka debate” is an irreconcilable difference between a host culture and one of its immigrant cultures.

There is no solution to the burka or the veil as frustrating as that may be for you or me or Nicolas Sarkozy. Indeed, the presence of this entire debate points to the lack of necessity for groups such as al Qaeda who seek to encourage conflict between the Arab and Muslim world and the West. With something as seemingly simple as the veil separating these worlds – what, aside from violence, can the terrorists add to such irreconcilable differences? Perhaps we have here merely one (admittedly problematic) indicator that globalization, which had an easier go of it in the twentieth century, may be slowing in the 21st. The veil and the burka are singularities which point to a radical alterity. Perhaps globalization is not guaranteed to win out afterall?

In the end, when we consider the enforcement of a ban on burkas and veils, this pathetic issue becomes almost laughable. We may soon see (in France) those Gendarmerie Nationale vans loaded down with French Police (they normally travel in small packs), detaining Muslim women for wearing a veil or a burka in public.

5. Four members of France’s Gendarmerie Nationale out for a stroll.

I assume the offending women will be issued a fine on the spot. I also wonder if she will be arrested for refusing to remove her veil or burka before proceeding? What about repeat offenders – will French citizenship be revoked? Jail time? Just how far will Sarkozy go to liberate her?