Baudrillard and the Inhuman in the “More Human Than Human”

How Art Made the World is a five part DVD series originally made for BBC Television and PBS in the US. It is narrated by the perspicacious Dr. Nigel Spivey of Cambridge University (who also played a significant role in writing the series). It makes interesting (occasionally compelling), viewing which, despite its near addiction to special effects and computer generated graphics, offers five historically insightful and thought provoking theses about how art made the world we live in today.

My review concentrates on an unmentioned connection between the thought of Baudrillard and the first episode: “More Human Than Human”. This episode could easily have been called “Why Makes Art, Art?” Interestingly, with no reference to Baudrillard it arrives (partially) at the same answer to this question that he does. The strength of this episode is the historical context into which the question is set. But by not having read their Baudrillard the makers of more human than human fail to account for the fact that this also includes the inhuman.

Spivey begins his case with the 4” high Venus of Willendorf which was made by some of our nomadic ancestors. “Venus”, says Spivey, “is more than just an important archaeological find – she is our first clue as to why our contemporary world is dominated by unrealistic images of the body [almost everything about the Venus is out of proportion – her breasts, thighs, sexual organs (extremely pronounced) etc., are grotesquely big”. Seeking an explanation of why Venus is a  purposely unrealistic representation of the body Spivey visits University of San Diego brain scientist V. S. Ramachandran. Here we are told that our ancestors producing exaggerated versions of female figures because they were “pre-programmed to exaggerate what mattered” the most – features of fatness and fertility it is believed now, were highly valued in their harsh world.

Spivey then sets out to answer a big question: Why, across cultures and across time, do humans produce unrealistic representations of our bodies? He moves onto examine Egyptian civilization (the first settled society to use images of the body extensively in their art). “What, he wonders, “happens to the old instinct to exaggerate when we meet settled civilization?” To answer this he needs to understand why there was no change in the unrealistic representation of the body in Egyptian society for 3,000 years.

Spivey takes us to a recent discovery from an unfinished tomb wall showing that a master grid was used for millennia all over Egypt when the body was represented [figures were nineteen squares tall, the feet were 2 squares long, the pupil of the eye was one square off of the centre line etc.] The Egyptians were working with a template which isn’t surprising because theirs was a civilization that valued permanence and a shared order the kind of which led to the pyramids and statues on an astounding scale.  Egypt then shows us the importance of culture – they didn’t represent the body the way they did because their brains were pre-programmed to do so, but because of their cultural values. With nomadic and settled cultures producing unrealistic artistic representations of the body Spivey brings us up to the present and asks why we do it? The answer he arrives at is very Baudrillardian and for him it lay in the Riace Bronzes.

These are two of the most incredible bronzes from ancient Greece which were discovered by Stefano Mariottini of the coast of Italy in the 1970s. Spivey makes a convincing case that ancient Greece had specific cultural values – their own equivalent with Egypt’s fixation with order and permanence was the Greek concern for the perfect body (an athletic body). The Greeks believed their gods took human form and had beautiful bodies – the better you looked the more like a god you were perceived. Hence the cult of the beautiful but the deep frustration of Greek sculpture that, until about 700 BCE, they were limited to making figurines.

It was the meeting of Egyptian and Greek culture (we learn from Herodotus), that enabled the Greeks to begin making life sized sculptures representing their desire to make perfect bodies such as the Kritian Boy. However, art immediately faced its own death here as it did at the end of the High Renaissance. Is perfection art? If we can make a perfect copy of a man why bother? If it is completely realistic then art isn’t “art”. One can hear Raphael’s students grumbling the same questions. His students were saved by the sacking of the Northern Italian cities which set off the innovative period of Mannerism. The Greeks were saved by boredom.

The Kritian Boy is amazing in its verisimilitude – the skin is natural over his muscles, his spine is perfect an yet he is relaxed in his stance. Within a generation the Greeks stopped making such things. Spivey says “the Greeks abandoned reality as soon as they achieved it”. One thinks of Baudrillard here: do we want the real, truth, meaning, certainty (beyond our own limited and restricted horizon? (Baudrillard, 1994:108). “Do we absolutely have to choose between meaning and non-meaning? But the point is precisely that we do not want to. The absence of meaning is no doubt intolerable, but it would be just as intolerable to see the world assume a definitive meaning” (Baudrillard, 2001:128).

A certain cure for boredom is to imagine our ideals and these are always at least somewhat exaggerated as we see by looking at (especially) representations of women in our culture today (as did our ancestors who made the Venuses of twenty-five millennia past). Today we even call the “perfect” (stereotypical blonde) female figure “statuesque”. Why statuesque? Spivey doesn’t focus on the term but his argument concerning the Greeks answers the question.

Art for the Greeks, like the Egyptians and the Ancient nomads as for us today, must be about something “more human than human”. As we will see shortly this is actually only a part of the answer, but it is a good one and it runs like this: Polyclitus (a Greek) sculptor used the Egyptian idea of lines and a grid to arrange the body so that figures could stand in completely unnatural poses and look quite natural – containing several ideal elements at once that no human body could display as arranged in a sculpture. Polyclitus’s idea met perfection in the Kritian Boy.

As for the Riace Bronzes there is a reason why no one makes sculptures like this today – our best artists do not possess the ability that their makers did. Two millennia before Donatello these Bronzes appear as alive and at first glance they are very realistic. But as we look more closely we find that Polyclitus’s ideas have been stretched – the legs are a little too long and over all, as Spivey says “it is anatomically impossible for a man to look like this”. The groove in the chest is too deep and while the muscles on the back are tense and impossibly well defined, those on the front are relaxed. The spine is impossibly deep and the only way their lower backs could look as they do is if the coccyx bone had been removed. The Riace Bronzes are sumptuously beautiful and quite unrealistic bodies. And they are far more beautiful than the perfect marble Kritian boy.

Spivey, ala Baudrillard, and without mentioning him, says that “We humans don’t like reality – we like carefully exaggerated bodies”. What a culture chooses is due to culture but all peoples who have made an art of the human body of the past twenty five millennia have chosen to exaggerate its form. Nigel Spivey is no plagiarist – he simply has not read his Baudrillard and neither apparently, has anyone else who made this series. If they had, they would have reached an even more powerful conclusion. What episode one does not answer, because it cannot think the second part of the question, given the enormous weight of humanism its makers labour under, is “what about the inhuman in art?” While we exaggerate ideals we also exaggerate our nightmares in art and this goes well past surrealism.

The problem with Spivey’s thesis in episode one is that it cannot account for unrealistic representations of the body that run toward the darker side of the imperfect – the “less human than human”. This would of course include surrealism, photographers from E. J. Bellocq to Joel-Peter Witkin, and painters such as Odd Nerdrum. 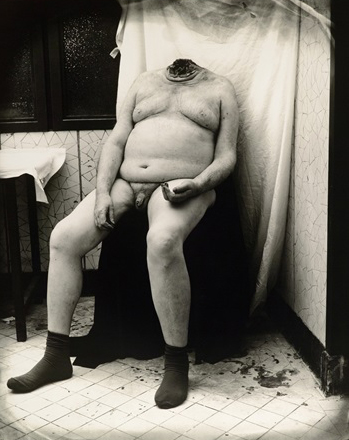 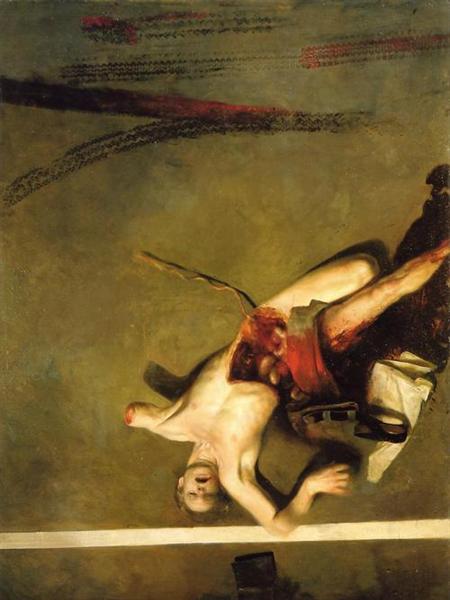 As Victoria Alexander has argued (Alexander, 2007) Nerdrum makes paintings that many have difficulty dealing with. He is a painter of gaunt and elongated figures in bleak (post apocalyptic?) landscapes. Illusion plays a much stronger role than realism in his work. Nerdrum’s art (especially the many pieces featuring people with amputations), stands up well to Baudrillard’s claim that “art become a mythic operator…in resolving the monstrosity of the social and of the social order”. Many of Nerdrum’s paintings concern a subject matter in a time not far removed from our own. The presence of the painted highway line however points to a time closer to our own. Otherwise his work often gives few clues to “when” the scene depicted is taking place. The Night Guard (wearing an early twentieth century leather aviator’s Helmet) or Refugees at Sea (the presence of an automobile tire) tell us that the human figures he paints have passed through some sort of collapse of our contemporary world – while the figures in other of his paintings (Initiation, Iron Law and Man With a Horse’s Head) could be inhabitants of a world of centuries past (Ibid). For me, as for Alexander, the overall challenge to the social that Nerdrum poses is that his characters operate in a desert-like landscape where the myth of the social and of humans as social beings has broken down (Ibid.). Nerdrum’s painting points to the inhumanity of our asocial and superficial world. 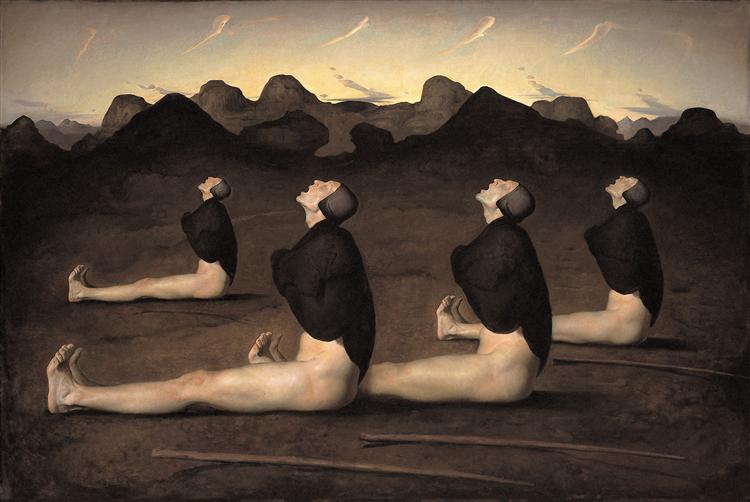 So to the makers of this BBC series I say that “More Human Than Human” sports part of a very fine Baudrillardian thesis but only looks at the neat and tidy side of it. In order to press deeper we need to understand that “more human than human” also includes our monstrous side. Art does that too in its many exaggerations of form be it an image by Joel-Peter Witkin or a painting by Odd Nerdrum.

As for the present day, I think to explain our thirst for images of starving children, abused prisoners, and the war dead on our media channels, (not to mention the inhumanly thin models on our catwalks which Spivey sees as exaggerations of perfection), we also need to examine the representation of the less human than human. This keystone episode is then an example of the limits of the humanist philosophical traditions of the country it comes from and the blinders it wears. Baudrillard (and he is of course not alone in the Continental tradition) more successfully approaches the exaggerations of human form that represent the monstrous side of human culture. A very important part of the exaggeration of the human body also runs in this direction and once again we have a good case for taking Baudrillard seriously.