Jeanloup Sieff: Fragments From the Wreckage

Jeanloup Sieff: Fragments From the Wreckage

No one can instantly attain frivolity. It is a privilege and an art; those who have realized that certainty is unattainable and who thus find it distasteful are the ones who search for the superficial; it is a flight away from the abyss which, as we know, is bottomless and leads nowhere (Cioran, Précis de décomposition).

As far as I can remember I have never been unhappy, I find it impossible to be unhappy. This is a worse curse, a worse misfortune than any other… they speak to you about a world of misfortune of which you have no deep sense (Baudrillard ([2000] 2002:110). 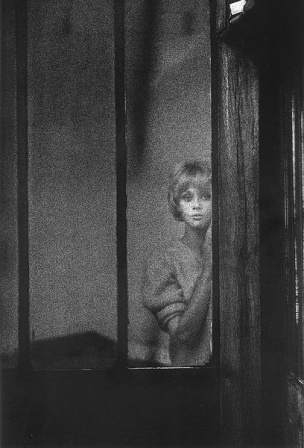 Jeanloup Sieff was a master of photography’s essential element: writing with light. He held very high expectations of the world that it allow him both frivolity and joy. Fortunately for Sieff the times in which he lived provided a torrent of possibilities for frivolity. A joyful existence takes great thought and effort and Sieff understood the necessity of melancholy to a truly joyful existence. In his text and images he seems to share with Baudrillard a wise man’s sense of joy and the inability to relate to those who are deeply unhappy. 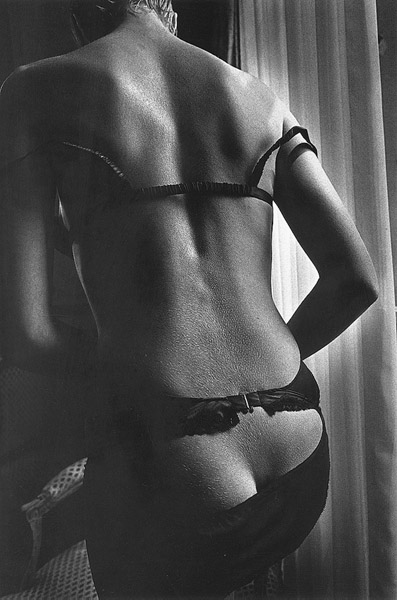 Sieff, a self proclaimed nostalgic, felt that time was wasting him and as a philosophical answer to the question “why do you take photographs” he answered: “to stop time flying”. Later, as he wrote his autobiography (and selected works from his oeuvre to accompany it), he came to better understand that pleasure had always been his guide and that too was his reason for photography: “the physical pleasure in rendering certain shapes, the pleasure of those maddening lights, the pleasure taken in composing and living through spaces and meetings” (Sieff, 2010:5). Sieff was among the very wisest of people who manage to make something pleasurable while only rarely, if ever, feeling like their work is a job.

Where melancholy made its presence most dearly felt in his life involved his constant searching for time past. An existential disquiet slowly overtook Sieff. His life (but not his image taking) was increasingly characterized by anxiety with the passage of time. From reading his autobiography it seems to me that this search for past time was Sieff’s ironic manner of embracing his own inevitable death (each photograph we take sets aside a small amount of time). “Photography” he said: “is a naive attempt to postpone death” (Sieff ([1990] 2010:96).

Yet few have ever understood joy and how to sustain it while doing this the way Sieff did – he cherished the original spontaneous joyful impulse and as he thought through the possibilities of that random impulse he attempted to prevent thought from obscuring the original spontaneous motivation. He had a studied gift for creating images one wants to hold on to. As in the image above from 1978 Sieff understood light as well as any photographer who has ever lived and this allowed him to study light and shadow (indeed, every body hair) in the women he so warmly photographed. There is a tenderness to Sieff’s images of women absent in other master image makers such as Helmut Newton. 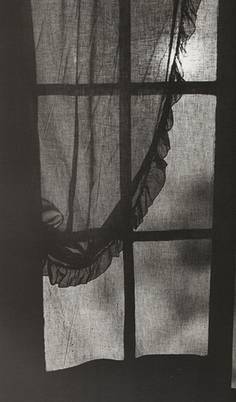 Sieff was not a political animal. In the 1960’s at the peak of unrest in Paris he went to hear speeches at the Sorbonne. He later reported that he “found it all wearisome, left for Saint Tropez with a friend [… and] the only real values: warm water and unchanging sky” (Sieff, [1990] 2010:47). Sieff thought in fragments intoned in memories but unlike so many he did not seek to unify his thought into a doctrine. He understood very well that the world is a game and that it was never predestined to exist for the human weaving of grand narratives. 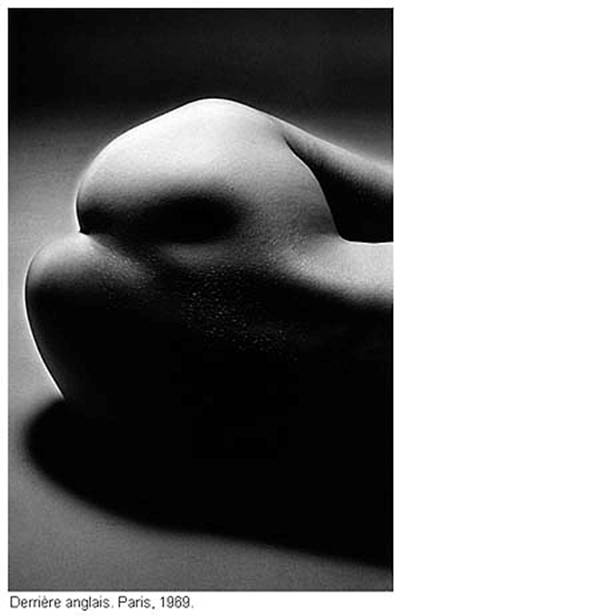 “The image lies at the point of intersection between the light emanating from the object and the light from the eyes” (Baudrillard [1999] 2001:141).

Sieff was a careful photographer of texture. His bodies often appear as landscapes – sculptural objects not unlike some by Henry Moore – but so very alive. Sieff did not care if he was called an artist but he did believe that artists exist: “Culture is something that you have to earn” he said, adding: “and I hope they call it elitist” (Sieff, [1990] 2010:95). Works like Light and Shade (1984) is a masterwork of light writing which uses the body as artistic canvas. Skiagraphy, the recording of shadows (in a highly artful manner), was also a long term interest of his. 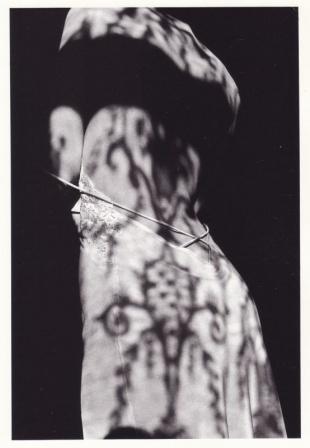 “The photographic image must have this quality of a universe from which the subject has withdrawn. The very detail of the object, of line and light, should signify this suspension of the subject, and hence also of the world, which is what creates the photograph’s tension” (Baudrillard [1990] 1993:154).

Sieff was no sexist but he was also never apologetic for his attraction to what he saw as “rare, elegant, and aristocratic bottoms that transcend their function… so unique are these bottoms that they almost deserve to have no arsehole”. There is something of a Kees van Dongen in Sieff – a man who deeply appreciates women’s bodies but is every bit as likely to be attracted to a powerful woman full of wisdom and insight (Coulter, 2008). Most critics did not understand this aspect of van Dongen because it was too easy to criticize the women he painted in the 1930s for having money. I like to think criticism has matured since the 1930s but such expectations are often disappointed. Like van Dongen, Sieff was well aware that his preferences for certain subjects would bring scorn upon him from certain quarters while feeling good in the knowledge that “if my work…displeases those I don’t like, it reassures me” (Sieff [1990] 2010:98). In any event, the culture has matured with time and today a feminized gallery going public may appreciate Sieff’s nudes [or his landscapes, portraits, or street scenes] for the remarkable quality of the image, as one appreciates the paintings of Lisa Yuskavage (see Coulter 2009).

Sieff took a satisfaction from his work that served as sufficient reward for doing it. Not surprisingly he liked to work with beautiful models and a few went on to established significant personal relationships with Sieff (such as Ina who lived with him for six years in the 1960s). For me, drawing on Barthes vital concept, the “punctum” of this image is the pair of fine lines under Ina’s left eye – a trace of death towards which Sieff himself was often attentive (see Barthes [1980] 1981:25 ff.). 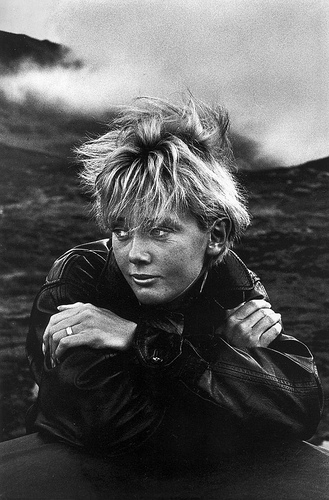 If one image may represent Sieff’s search for past time it is likely his portrait of the photographer Jacques-Henri Lartigue. Lartigue took remarkable photographs from boyhood but was not discovered until some of his images appeared in an American magazine the week of the assassination of JFK. In Sieff’s portrait we see clearly the boyish face under the wrinkles and accumulations of flesh/time. It is very rare for any portrait to penetrate the mask of its subject but I believe this one has done just that – and behind the mask we find the boy. 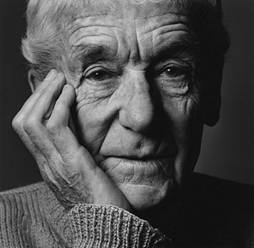 In another instance where the subject was less known to Sieff (Lartigue was a very close friend), Sieff records the image behind a veil of smoke. This portrait of Nourissier [author of the brilliant novel Bratislava – concerning aging and memory], calls to mind the portraits of Francis Bacon where a swirl of paint in the middle of the subject’s face stand in for the unknowable aspect of the person.

It is difficult to decide which of Sieff’s photographs is his best and almost oddly it seems to me to be his most “artistic”. Profile (Paris, 1989) is an image of a woman that Picasso, Gris, or Braque might well have been pleased to make in the early years of cubism. Like many of his images it arrests our attention and only slowly reveals how it was composed. At first glance the face we see in the upper left appears to be the face of the woman who occupies the image. The face appears shrouded in shadow until we realize that the face we see is a shadow. Her actual face is not in the photograph (we see the exact angle of the sunlight if we look at the position of her breasts relative to the shadows – from that information we can plot the position of her face). 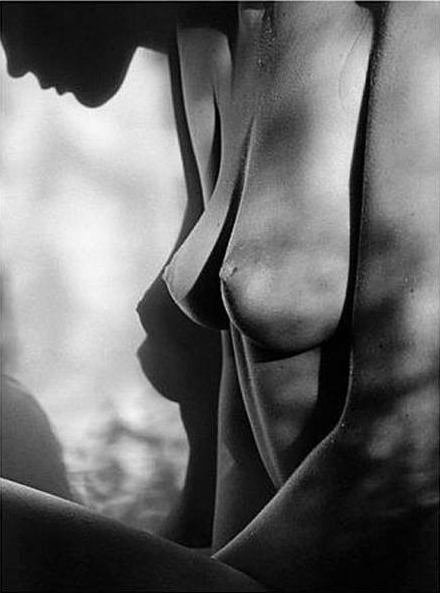 “Prose requires other truths… But what if you were to steal those of poetry, if you pillaged its substance and dared as much as the poets?” (Cioran [1949] 1998:99).

Since Talbot and Daguerre discovered methods for freezing brief instants of time, billions of fragments of the world have achieved an unexpected (and in many cases undeserved) immortality. Petites-Dalles is an image taken near Sieff’s home in Normandy. It is among his most remarkable images not for its aesthetic or for its impressive light writing, but because it is a photograph of the wind in which we can feel the wind. Poignancy is added when we learn that this was the last image he took with his Leica camera which he temporarily lost to the sea moments later. He wrote: “I see this picture as the last will and testament of my old M4 which lies rusty on my desk” (Sieff [1990] 2010:159). 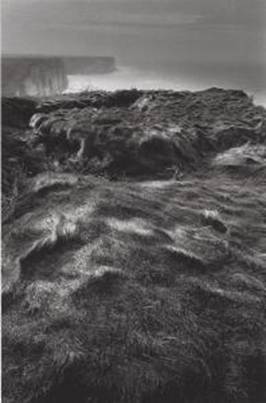 Proust, who appears to have had an enormous impact on Sieff’s thinking, wrote that “we feel in one world, we think, we give names to things in another; between the two we can establish a certain correspondence, but not bridge the gap ([1921] 1992: volume III, 57). Sieff, like each of us, was forever between these two realms and it seems that he used his camera deal with this problem. Perhaps this is the motive at the heart of the desire to take images – the record of a constant crossing between feeling and thinking.

In search of “A la recherché…” (Guermantes, Marne)

Photographs freeze time in the gap between feeling and thought. Photographers refer to the fault line separating the two as the space of composition. Sieff understood this as well as anyone who has ever picked up a camera.

In Sieff I find the rarest of things in books – a kindred spirit. Another man who has thought some of my own thoughts, another Baudrillard, another Cioran, another who speaks to my sense of joy, melancholy, and lack of understanding of unhappiness. If I am to conclude this joyful writing in the spirit of Jeanloup Sieff, I must acknowledge that it is a tribute to having discovered a kindred spirit and that this has been among its principle pleasures. There are, we should remember, many moments of happiness which photography cannot render.

Sieff did very fulfilling and serious work with joy and pleasure. In him was the “sheer joy of being human” which enabled him to experience, at a level approaching perfection, “the joy of taking photographs” (Baudrillard [1990] 1993: 53, 153). Like all great image takers he managed to joyfully salvage a few fragments from the wreckage of the world.

“If death is as horrible as claimed, how is it that after the passage of a certain period of time we consider happy any being, friend, or enemy, who has ceased to live?” (Cioran [1973] 1998:34).

About the Author
Dr. Gerry Coulter is from Bishop’s University, Canada. He is the founder of IJBS.

Emile Cioran ([1934] 1992). On the Heights of Despair. Chicago: University of Chicago Press. Translated by Ilinca Zarifopol-Johnson.