Then and Now. McCarthyism Today

Note: A slightly shorter version of this article was first published by Panel-House.com (February 26, 2005) 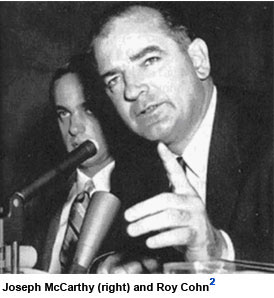 The fusion of ideas and power can produce dramatic results, but not all have favorable outcomes. Looking back at recent history, an example of this would be the McCarthy era of the 1950s, in which the paranoid ideas and abuse of power by a few in the Senate fostered national insecurity. But to argue here in too great a detail whether or not this was necessary isn’t the primary concern. A cause for alarm was warranted due to tensions and threat of possible nuclear war between the United States and the Soviet Union. Sounds serious, doesn’t it? Certainly, but were the reactions of Joseph McCarthy necessary or were they just a nuisance? With these events in hindsight we can see that McCarthyism was a misfortune that restrained artistic freedom, turning neighbors against one another due suspected communist leanings, and brought unnecessary fear to the nation, causing bomb shelters to be built in basements. Today this is easily comparable to the current war on terror; citizens are told to buy duct tape and plastic to build bio-forts in their homes, artists are arrested for dabbling in biology2 , and anybody who speaks up against the president’s policies can be labeled as unpatriotic and locked away. Today is comparable to the McCarthy period because we are being gripped by a fear and we can’t tell whether it’s justified or not. A main reason for this is because media images prevent us from knowing the facts. 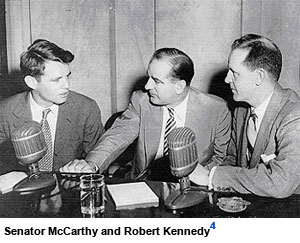 We cannot ignore terrorist threats, yet the present state of fear that the government has placed on American citizens is unnecessary. A large part of the success of this fear is the use of the media. News channels, newspapers, and talk radio all reinforce and increase the present state of fear. Society is finding itself in a devastating time of political upheaval and downright corruption. It is also disturbing that all “facts” that society retrieves come through filtration sources such as the media. Jean Baudrillard’s 1984 lecture The Evil Demons of Images4 has never seemed fresher or more real.

Baudrillard was attempting to describe how, in the Postmodern era, images have developed into conquerors, succeeding where military might has failed. Baudrillard asserts that we have spontaneous confidence in the realism of images, but we are wrong. The essay was published in 1984, an ill-omened year to be writing on such a topic, when many were assuming Postmodernism was a theory here to stay, for a few decades at least. Yet currently you can argue two things: Postmodernism is at an end, or it has never really begun and simply operates as an extension of Modernism. If you assert the former then it can be argued that we have entered a new realm of the Postmodern media in which the subjective or the personal are the only possibilities, whereas a pure, neutral, or objective perspective is seen as impossible.

In Mapping the Postmodern Andreas Huyssen argues, “it is certainly no accident that questions of subjectivity and authorship have resurfaced with a vengeance in the postmodern text. After all, it does matter who is speaking or writing”.5 Two current examples of this are Michael Moore’s Fahrenheit 9/11 and the general phenomenon of conservative talk radio, where the truth is openly and unapologetically slanted in favor of a cause or a movement.

However, the current problem in the media is that many people can distinguish subjectivity and are weary of it, but are not adept at interpretation. Baudrillard believed in 1984 that events no longer had meaning because they have been “preceded by models with which their own process can only coincide.” Therefore, they have come to rely on an emblem, or a political figurehead they identify with, to tell them which sources they should trust and which they shouldn’t. An example of this is the coverage of the Iraq war, where news anchors were shown embedded with military units, offering a “reality” television version of the news. Baudrillard writes, “war becomes film, film becomes war, and the two are united by their mutual overflow of technology.” This intimacy with the war and its coverage has led many people to feel personally involved and thus dependent on coverage of this issue. Baudrillard suggests that images are immoral but there is a brute fascination and primal pleasure with them. As a result, they allow themselves to be co-opted by this present fear. Much like the bomb drills that saw school children diving under their desks in the 1950s, we now have multi-colored terror alerts from Homeland Security: 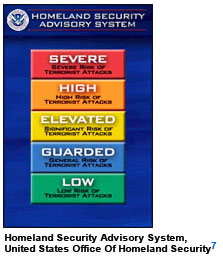 The true irony of Postmodernism is that is has been replaced by a yearning for the apparent innocence of the Modern agenda of a pure aesthetic.

And this is where one might choose to argue for the latter theory of Postmodernism, where it acts as an extension of Modernism. In such an instance, Postmodernism becomes a release for Modernism when it finds itself in a rut – much like Romanticism and Classicism, where culture fluctuates between yearning for the past and looking forward to the future. In America today we await a politics to come while considering the striking coincidences with the politics of the past. 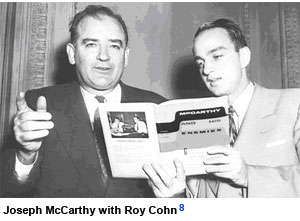 There is a fierce irony here: the irony of an anti-terrorist world system that ends up internalizing terror, inflicting it on itself and emptying itself of any political substance – and going so far as to turn on its own population. Is this a remnant of the Cold War and the balance of terror? But this time it’s a deterrence without as cold war, a terror without balance. Or rather it is a universal cold war, ground into the tiniest interstices of social and political life.8 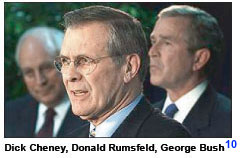 About the Author:
Mary Beyer and Michael Beyer are Chicago based writers.

4 – Jean Baudrillard. The Evil Demon of Images. (c 1984). Sydney: Power Institute Publications, 1987. (This was the text of Baudrillard’s “Mary Kitna Memorial Lecture” in Australia in 1984).